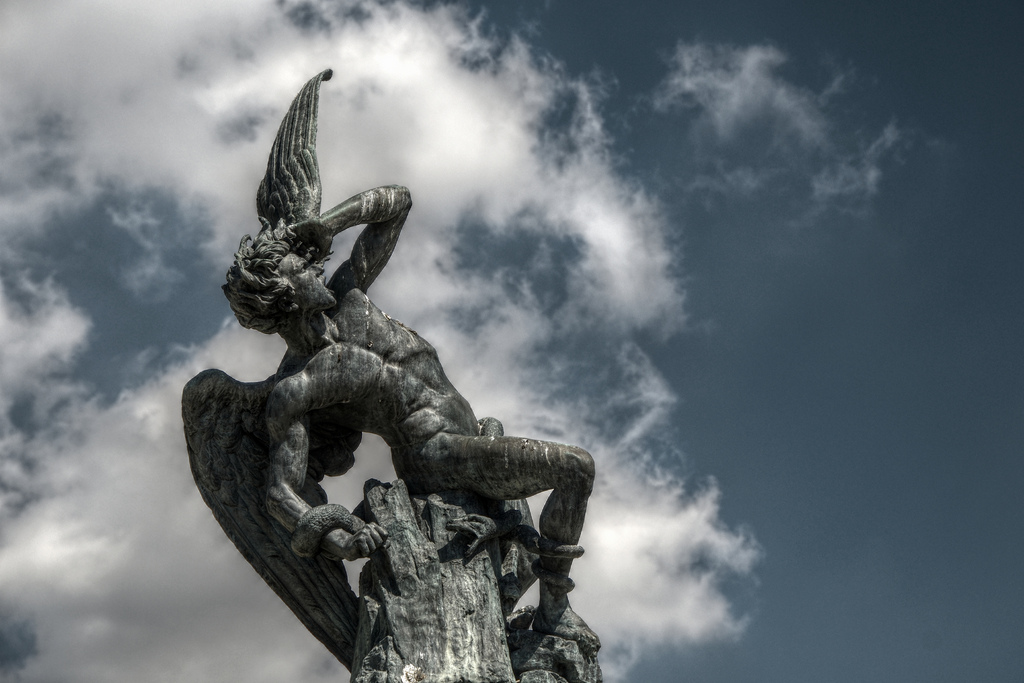 The Mother of Mankind, what time his Pride

Had cast him out from Heav’n, with all his Host

Of Rebel Angels. (…) Round he throws his baleful eyes

That witnessed huge affliction and dismay

This quote is from the first book of John Milton’s epic poem, Paradise Lost, which deals with Lucifer’s exile from heaven.

For lovers of mystery it will come as no surprise to discover that Madrid is home to one of the few statues in the world of the fallen angel. Should you wish to broaden your knowledge on the subject, however, I invite you to read on.

At the centre of the beautiful Retiro Park, where I recommend spending a carefree Sunday, you can find the fountain of the Ángel Caído. The fallen angel… Lucifer.

Lucifer was the first angel created by God, his favourite, the most beautiful and intelligent of all. Lucifer’s purpose was to help to create the earth, but soon he was blinded by pride and ambition, and plotted to seize the kingdom of heaven with the help of other rebellious angels. At this point, God ordered the Archangel Michael to oust the traitor. After a terrible battle, Lucifer was defeated and condemned to an eternity in hell.

It seems unbelievable that a city should wish to display a monument paying homage to the very impersonation of evil, but some claim that the figure is not really Satan, rather an angel in the process of falling, which is a story from the bible.

There are two other statues representing the “Fallen Angel” in the world: one in Turin (Italy) at the top of the monument to the Frejus Tunnel, and the other in Quito (Ecuador), where the face of the devil forms part of a work entitled Brutal Power.

Of these three monuments, the most fascinating of all, in my opinion, is the one found in Madrid.

The statue was created in 1878 by the artist Ricardo Bellevar, and won the prestigious First Class medal in the National Exhibition of Fine Arts celebrated in Madrid that same year.

Spain is one of the most Catholic countries in the world and was seat of the Spanish Inquisition, that terrifying institution conceived with the sole objective of destroying heresy and heretics. How is it, then, that such a country can tolerate a monument to Satan in it’s capital?

Citizens have often complained about it, but the authorities have defended the monument as an accurate representation of a biblical passage of paramount importance. A warning not to sin by supremacy, the worst of the seven deadly sins according to the Catholic Church, which if pushed to it’s extreme can lead us to consider ourselves greater than God, precisely as Satan did.

But what if there were more to the story?

What if the legend that speaks of the devil as a divine messenger were true? There are traditional sources that describe Satan as having been sent to earth to teach people true knowledge on their path to self-perfection.

Originating in Persia, these tales portray the devil as a close collaborator of God, who came down to earth to help us rediscover our own divine nature … perhaps through vice? Or through our ability to fight it?

Certainly our inherited view of the devil is quite different to that which, through the decades, has pervaded this statue with an aura of evil.

It is said that in this corner of the park there was a cemetery, and that after the statue was placed the satanic sects of Madrid would gather at his feet. Screams and lamentations could be heard on the nights of the black moon, and the following morning traces of blood were often found.

History and legend can be confused, nonetheless a shiver runs down one’s spine on discovering that the statue is located exactly 666 meters above sea level … just like the 666 words of this article.