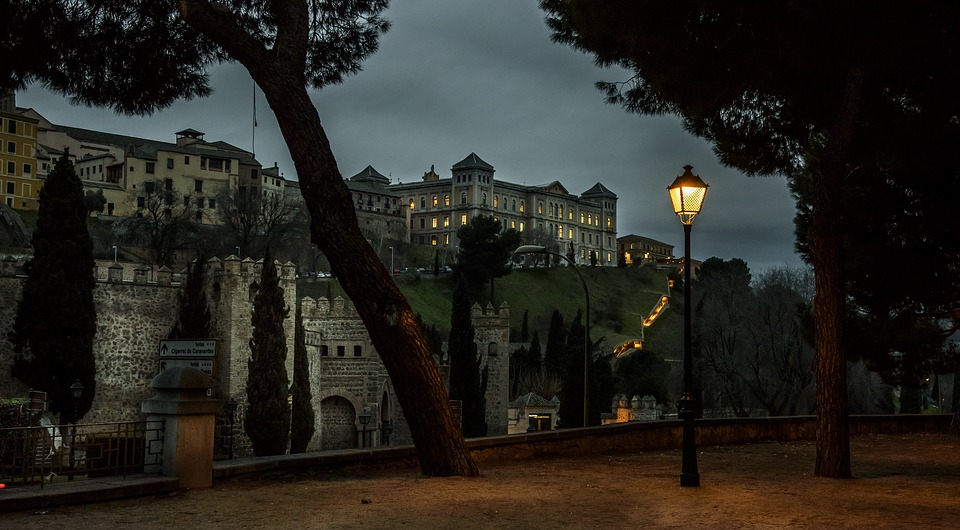 This is how a meticulous description of a sacrifice to Satan begins, a description dating back to the sixteenth century, and that you can explore further by taking a short trip out of Madrid.  Only an hour from the Spanish capital stands the majestic city of Toledo, an ancient place, where the royal court used to be located and where a major figure of the Spanish church, the archbishop of Toledo, still resides. A city with a rich history, where it is possible to perceive a disturbing atmosphere as soon as you arrive, passing under what is called ‘el arco de la sangre’, the arch of blood.

Once in the city of Toledo the attractions for you, lovers of mystery, are innumerable. A museum dedicated to the Spanish Inquisition, one about torture and another dedicated to the Knights Templar. Whilst you are spoilt for choice, my advice is to lose yourself in the museum of brujería, witchcraft.

The exhibitions display material from all periods of history, collected by an Italian merchant known as signor Alessandro. More than 300 pieces transport us to a dark world inhabited by unusual creatures and strange substances.

As you enter, you become aware of a world far removed from modern technology, a hostile and dangerous world.

You will learn about the various types of poison that silently killed thousands of people throughout history. This was an ingenious way to dispose of your enemies, perhaps hiding this deadly substance inside one of the many rings that nobles used to sport on their lily-white hands.

But the middle ages were not only times of poison, they were also the centuries of natural drugs. The same poisons, in contained doses, were used to invoke experiences that expanded human perception. Opium, wormwood and mandrake were herbs that, through special treatments, created new and fascinating sensations.

And where drugs failed, aphrodisiacs succeeded. Everyone, men and women alike (and let’s not kid ourselves here), used substances and objects to awaken their sexual appetites, or simply to satisfy them.

Use of these substances was not, however, something that could be improvised overnight. There were women who had an enormous knowledge of plants and herbs, and who put their expertise at the service of others.

These women are known today as witches.

To begin with, having knowledge that surpassed the science of the age was considered an offense to the Lord.   If we add to this the fact that these were free women, who often removed themselves from society in order to lead a more ‘natural’ existence, we understand that their lifestyle and their ideology could represent a serious threat to the whole community.

As a consequence, for centuries these women were captured and burned at the stake, after confessing their alleged misdeeds and relationship with a ‘devil’ they had previously been oblivious to, but who perhaps they called upon in their final moments to alleviate the pains of torture.

Another part of the museum’s exhibition is dedicated to those infernal torture devices with which the ‘just’ punished those beings who had been corrupted by the devil. Imagining how many deceased people must have suffered on these infernal contraptions makes a shiver run down your spine. However it is more difficult to pass moral judgment when you take into account that the torturers sincerely believed they were inflicting punishment on advocates of the devil… real witches.

As you enter the museum you will find a huge book that describes, step by step, the ritual sacrifice necessary to invoke the appearance of Satan. The infant needed for the ceremony was kidnapped and slaughtered over a cup, from which blood was collected offered to the devil.

The rituals described are varied and complex, so it would be easy to make a small mistake. And perhaps the followers of Beelzebub, believing that the failure to invoke an apparition of the devil was due to their oversight, proceeded therefore to look for a new infant.

The result of the sacrifice was, according to these beliefs, the appearance of the devil in flesh and blood. He would have been welcomed by the witches in complete nudity, offering him their own sex, ready for evil to possess them and father a lineage of demons.

These days, perhaps it is difficult for us to imagine how anyone could participate in such gruesome rituals. Looking back through history, however, from a time in which men continue to massacre their fellow men without any sense of guilt, I almost feel I can say that the devil has indeed succeeded in giving life to his own children.

The Heresies of Madrid