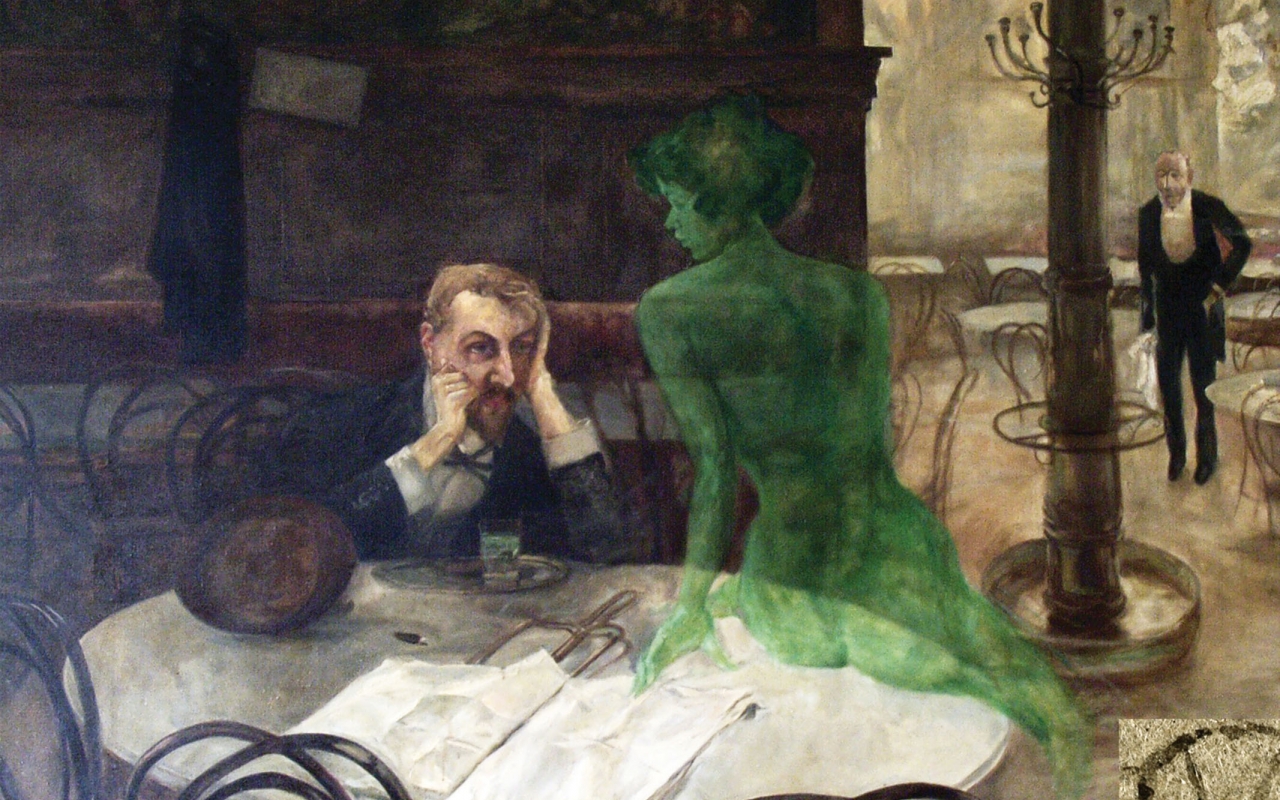 Nothing typifies the milieu of La Belle Epoque more than Absinthe, the notorious drink of choice of artists and Bohemians in fin de siecle London and Paris. While little of the alleged psychoactive or hallucinatory aspects of absinthe have been explained by science, what we do know is that the drink touched the lives and influenced the work of many an artist, writer and intellectual including Van Gogh, Oscar Wilde, Charles Cros, Baudelaire, Verlaine, Rimbaud and Guy de Maupassant among many other famous, not so famous and the downright notorious.

All mad as boxes of frogs. But were they driven mad by their dalliance with La Fée Verte (The Green Fairy) or did they indulge to exercise (and exorcise!) their dark creative fantasies? The answer is probably a heady mixture of both.

Living in Prague, Czech Republic, I’m often asked what the best Absinthe is but it’s an impossible question to answer because it depends on so many variables. If the aim is to get as smashed as possible as quickly as possible well the stuff will do that – at a price. There are many cheaper, and better tasting, alcohols that will accomplish that. It really depends on what the Absinthe seeker desires. The methodical French ritual, the dramatic flaming hot shot, an authentic vintage recipe or one of the many modern variations.

Many bars in Prague offer a B52 or similar mix including absinthe. The mixture is ignited and downed in one go through a straw before it (or your mouth) burns. This modern method – the Bohemian Absinthe Ritual – was popularised in the film Moulin Rouge (2001) and seems to be expected by tourists. It’s certainly colourful, dramatic and, I suppose, something everyone should try at least once in their life – just to be able to say you had the experience. Purists on the other hand recommend the traditional French ritual: One or two sugar cubes are placed on an Absinthe spoon over the specially shaped Absinthe glass which contains 2 to 4cl of Absinthe (about a tenth pint). Then water is poured gently over the spoon. The green Absinthe begins to louche into white sage. In former times so called “Absinthe Fontaines”, “Brouille Sets” and “Reservoir Glasses” were widely used to dissolve the sugar with a thin beam of water which creates the perfect Louche. The Louching ritual adds to the anticipated arrival of the Green Fairy as the drink is then sipped gradually.

Now legal again in many countries, the only advice I would give is to avoid most Czech produced Absinths (spelt without the ‘e’) as they are mainly made from macerated herbs and not a distillation. Other than that there is a huge variety of both traditional and modern Absinthes available to the Absinthe adventurer. One of the most reliable online suppliers is Alandia.de who make a wide range available along with accessories including vintage items – a rare Belle Epoque Absinthe spoon can cost up to 1000 eros or more. They guarantee delivery to the USA but potential buyers should note that due to legal restrictions Alandia cannot ship Absinthe with alcohol content over 70% by vol. to some states.

Absinthe is a herbal spirit, typically of green colour. The basic ingredients of authentic Absinthe are wormwood (artemisia absinthium), green anise and fennel.

The first known advertisement for Absinthe appeared in a Neuchatel (Switzerland) newspaper of 1769. Suzanne-Margerite Henriod advertised their remedy “Bon Extrait d’Absinthe”, which consisted of alcohol, wormwood, aniseed, lemon balm and other herbs. This formula was later modified by a certain Dr. Ordinaire (yes, that was his real name), the inventor of “modern” Absinthe. In 1792 he concocted a formula of 8 plants, including wormwood, anise, hyssop and fennel, and used 136-proof alcohol, which became the traditional proof of real Absinthe.

In 1797 the formula was sold to Major Dubied who build together with his son and son in law Mr. H. L. Pernod the first Absinthe factory in Couvet, Switzerland. In 1805 a second plant in Pontarlier, France, followed and helped Pernod to gain a fame that lasts until our present time.

Around 1910 the total turnover of Absinthe distribution had reached immeasurable peaks. To satisfy the large demand, unfortunately some distilleries made use of low-grade alcohol and used copper sulphate for coloration. These irresponsible dealings with the drink together with economical interests of the French wine lobby finally resulted in the prohibition of Absinthe in (almost) all countries of Europe by the year 1920. To be precise, the first country, which banned the Green Fairy was Switzerland in 1910. The French followed in 1914 and Germans on march 27, 1923. In Germany not only the liquor but also the distribution of recipe was prohibited.

More than half a century had to pass until the production and distribution of Absinthe once again turned legal in the countries of the European Community. Germany was one of the first countries, which lifted the ban. In 1981 the Anti-Absinthe law was annulled. However, this didn’t change the situation a lot, as the regulations regarding aroma and flavorings still prohibited the use of wormwood oil/thujon. Therefore Absinthe effectively continued to be prohibited. On September 27, 1991, this changed. The legal limit of thujon in spirits with an alcohol degree of up to 25% was set to 5 mg/kg, 10 mg/kg for spirits with up to 25% and 35 mg/kg for bitters. These limits were adopted from the limits set by the European Union in 1988. Outside of the EU, Switzerland legalized Absinthe in the year 2005 and the US followed in 2007 – with some labeling and recipe restrictions.