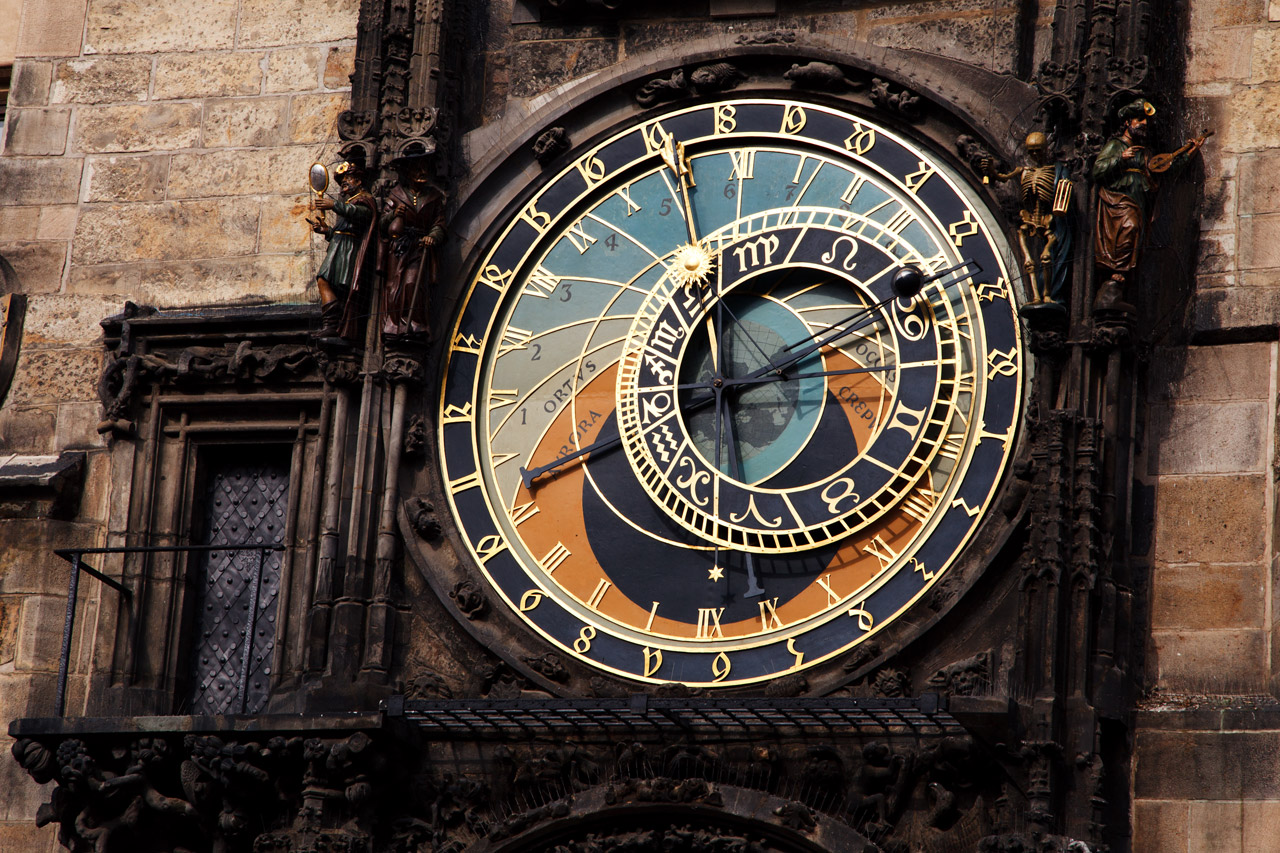 Orloj, the Astronomical Clock & the Legend of Master Hanus 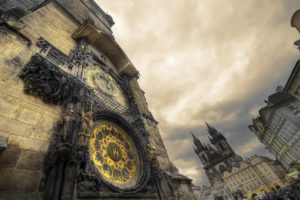 In the Middle Ages, under the control of Kings and the capital of the bohemian kingdom, Prague’s position as the crossroads of Europe led to its growth into a magnificent city, at that time far larger and more important than Paris or London. To celebrate its economic success and cultural importance, it was decided that Prague needed a new landmark to demonstrate its magnificence. Thus, the world famous Astronomical Clock or Orloj was installed in 1410 making it the third-oldest astronomical clock in the world and the oldest one still working.

The clock mechanism itself is composed of three main components: the astronomical dial, representing the position of the Sun and Moon in the sky and displaying various astronomical details; “The Walk of the Apostles”, a clockwork hourly show of figures of the Apostles and other moving sculptures—notably a figure of Death (represented by a skeleton) striking the time; and a calendar dial with medallions representing the months.

Written on the eastern (left) part of the horizon is aurora (dawn in Latin) and ortus (rising). On the western (right) part is occasus (sunset), and crepusculum (twilight).

Golden Roman numbers at the outer edge of blue circle are the timescale of a normal 24 hour day and indicate time in local Prague time, or Central European Time. Curved golden lines dividing the blue part of dial into 12 parts are marks for unequal “hours”. These hours are defined as 1/12 of the time between sunrise and sunset, and vary as the days grow longer or shorter during the year.

Zodiacal ring
Inside the large black outer circle lies another movable circle marked with the signs of the zodiac which indicates the location of the Sun on the ecliptic. The signs are shown in anticlockwise order. In the photograph accompanying this section, the Sun is currently moving anticlockwise from Aquarius into Pisces.

The displacement of the zodiac circle results from the use of a stereographic projection of the ecliptic plane using the North pole as the basis of the projection. This is commonly seen in astronomical clocks of the period.

The small golden star shows the position of the vernal equinox, and sidereal time can be read on the scale with golden Roman with numerals. Zodiac is on the 366 teeth gear inside the machine. This gear is connect to the sun gear and the moon gear by 24 teeth gear.

Old Czech time scale
At the outer edge of the clock, golden Schwabacher numerals are set on a black background. These numbers indicate Old Czech Time (or Italian hours), with 24 indicating the time of sunset, which varies during the year from as early as 16:00 in winter to 20:16 in summer. This ring moves back and forth during the year to coincide with the time of sunset.

Sun
The golden Sun moves around the zodiacal circle, thus showing its position on the ecliptic. The sun is attached to an arm with a golden hand, and together they show the time in three different ways:

Additionally, the distance of the Sun from the center of the dial shows the time of sunrise and sunset. Sun and hand of the sun are at the 365 teeth gear inside the machine.

Moon
The movement of the Moon on the ecliptic is shown similarly to that of the Sun, although the speed is much faster (due to the Moon’s own orbit around the Earth). The half-silvered sphere of the moon also shows the Lunar phase. Moon is on the 379 teeth gear inside the machine.

Legend
There are many legends surrounding the Orloj, the most famous of which is about the master clockmaker Hanus. Following the completion, installation and grand opening ceremony the Town Councilors were so proud of this Astronomical Clock, that it occurred to them that Hanus could possiby be commissioned by another city to build an even grander, more impressive timepiece for another city. The councilors debated in secret how to best prevent this from happening. A variety of ideas were considered including a large financial payoff but finally they decided upon a cruel plan.

Late one cold evening while Hanus was at his workshop there was a loud knock at his door. He opened it to three hooded figures who burst in and tied Hanus to a chair. One of the men went to the glowing fire and thrust a poker into the glowing embers. When the poker was red hot, it was removed from the fire and used to blind the confused and frightened clockmaker.

In the morning his apprentice arrived for work and found his master in the throes of a convulsive fever and set about nursing his master back to health. As he was recovering, Hanus turned over in his mind every possible motive for his attack and came to the conclusion that it was to prevent from working again.

Fully recovered, Master Hanus asked his apprentice to take him to his beloved Orloj. The youngster duly took his blind Master by the arm and they climbed the steps to the very top of the clocktower and to the complicated mechanism. With deft hands Master Hanus felt carefully among the cogs and gears finally setting upon the piece he was seeking. With an almighty wrench he pulled from the mechanism a vital component. The mechanism slowed and ground to a halt and, at that very moment, Hanus dropped dead on the spot.

The clock refused all attempts to make it work and those who tried to repair it either died or went mad.

It is said that the spirit of Master Hanus remains and still walks the tower.

A further legend gives the Skeleton magical power of foretelling the future and says that if the clock is left damaged for a long time, hard times will result for the Czech nation.