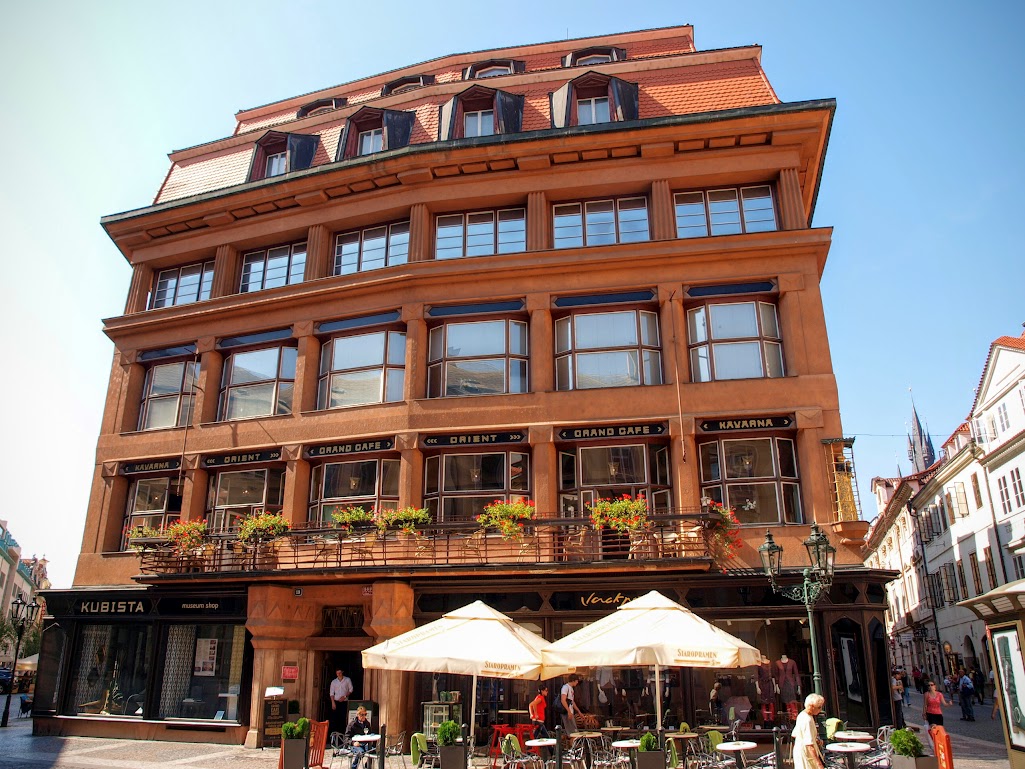 Designed by Josef Gocár, The House of the Black Madonna ((U Cerné Matky Boí)) is a cubist building in the “Old Town” area of Prague, Czech Republic and the first floor, reached via a magnificent spiral staircase, is home to the Grand Cafe Orient also known as ‘The Cubist Cafe’ and locally as ‘Kubista.’
The building symbolizes the unique Czech contribution to the cubist movement not only in architecture but in furniture, pottery and glass. The House of the Black Madonna on the corner of Celetná Street was designed and built between 1911 and 1912 by the renowned architect Josef Gocár. The 31 years old Gocár built the house as the first example of cubist architecture in Prague, and it remains probably the most celebrated. Even without historical details of the baroque building surrounding it, the House at the Black Madonna maintains the atmosphere of the neighborhood.

The café within the house remained open for a mere ten years or so but closed in the 1920s when cubism fell out of fashion. Happily this state of affairs has changed and one finds cafés in Secession, Art Deco and Art Nouveau style all over the world. The Grand Café Orient, the ancestor of all of them, remains the most significant and elegant. The cubist aspects of the house are displayed not only by its frontage and floor-plan but in the internal furnishings in the café. These include a beautiful cubist buffet-bar and other furnishings and elegant lights and lanterns all designed by Josef Gocár.

The house is so named after the stone sculpture of the Black Madonna that originally adorned one of the two Baroque buildings that once stood on the same site. Gocár decided to retain the figure and incorporated it into the design we can still see today. There is considerable evidence that the medieaval Order of the Knights Templar worshipped a strange figure (probably) Baphomet and the icon known the world over as the Black Madonna. Little is known about the origins and meaning of this mysterious figure but it is well documented that there was a chapel and the local headquarters of the Knights Templar at 27 Celetná Ulice (Celetná Street) which is less than a stone’s throw from the House of the Black Madonna. The remains of the Temple can still be seen today. Following the abolition of the Order by Papal decree (Clement V) in 1312 (due to a request by King Philip IV of France who just happened to be, coincidentally, deeply in hock to the Order), remaining members of the Order would meet secretly in the basement of the house where a stone altar of the Order was discovered during renovations many centuries later.

My favourite cafe in the entire world, the Grand Cafe Orient serves just the best carrot cake I have ever tasted!

*To discover more of Ancient and Mysterious Prague and to hear Terrifying Tales of Alchemy, Magic, Madness, Murder and Macabre Mysteries head over to http://mysteriumtours.com