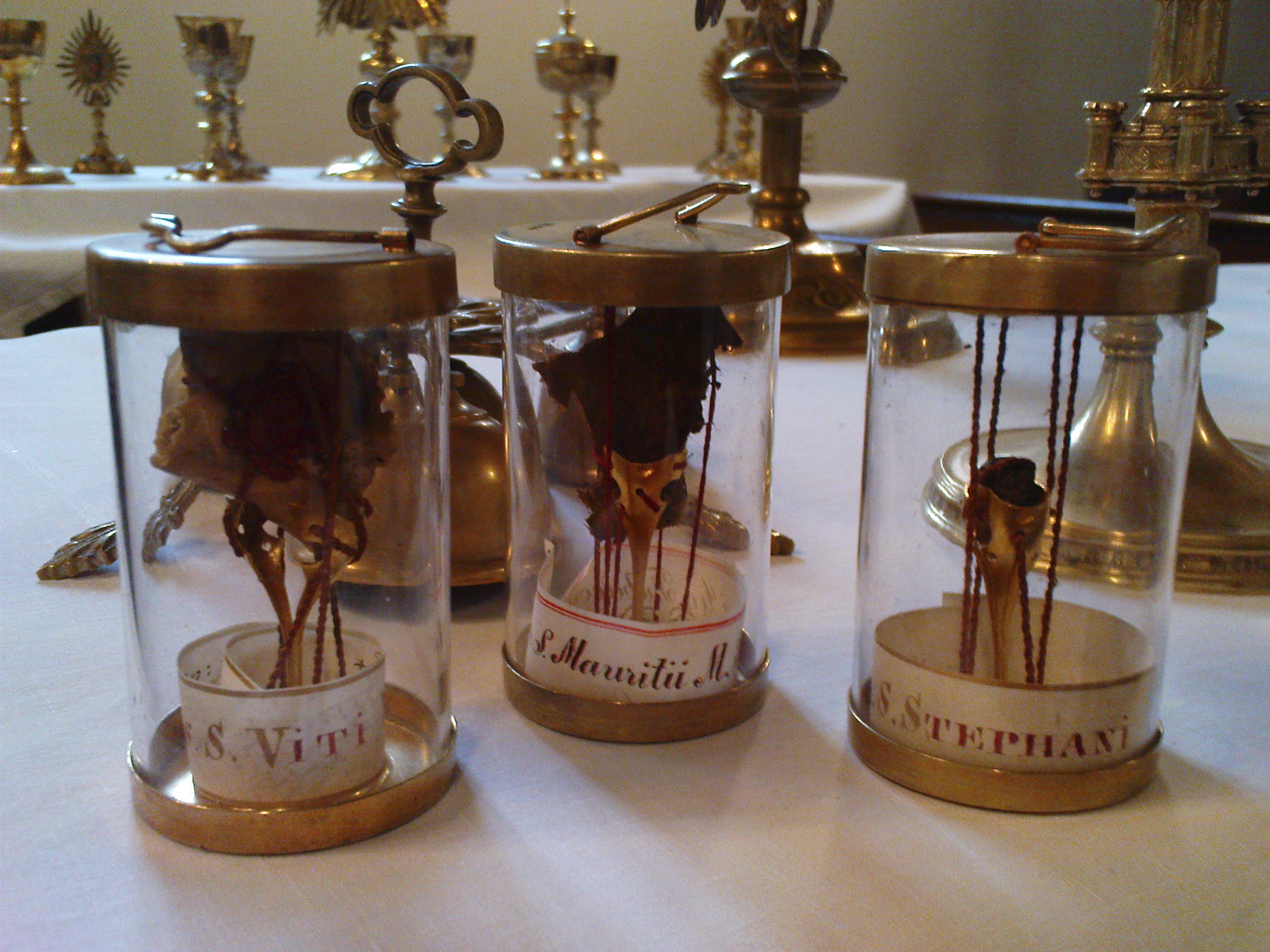 There is the skull of a holy man in the Old Town Bridge Tower in Prague. If you visit, you’ll be told that this relic belongs to St. Vitus of the Catholic Church, an early Christian martyred by the Roman emperor Diocletian. His arm is also interred in Prague in a crypt under St. Vitus’ Cathedral. Are these really the remains of a saint, though? If not, then they are part of a grim case of mistaken identity that may be spread throughout the continent as a whole…

Catholicism has been ingrained into the past of Western and Eastern Europe since the Romans started to bring it into the region. When the Roman Empire split apart and the western portion fell and kicked off Europe’s dark ages, the Pope’s influence stayed. As Europe began to reorganize itself and form the nations that survived into the Middle Ages and onwards, great churches were built, and small communities formed around them. Bishops of certain regions could become quite powerful and wealthy by controlling several services, such as marriage and other blessings. The Pope himself became one of the strongest political powers in Europe. His ability to sanction the rule of feudal lords and even when wars could be waged amongst the fiefdoms made it so that kings and queens bowed to his will unless they wanted to risk being excommunicated. Europe accepted Catholicism’s beliefs until the appearance of Martin Luther and Protestantism, and by then Catholicism had had a hand in shaping much of Europe’s culture.

A core tenet of Catholicism is that life is transitory and fleeting. Jesus Christ offered his own body and blood to his followers on the evening before his death. This world is soon to be lost, and sights should be set on the world beyond. A preoccupation with death could be seen in much of the art and music of the Middle Ages. Physical things were just as transitory as life itself in these tumultuous medieval times. Bodies themselves became a means to an end. Flesh and blood and bone were temporary things, meant to be used and spent.

Is it any wonder, then, that the cathedrals of the times would incorporate this belief into their operation as great moneymakers? Churches competed with each other to attract the faithful, as these worshipers were obligated to support the clergy with a tithe of their own wealth. Part of this wealth would go to the local priests and church before the rest went to the Vatican. One of the ways that these parishes would attract laypersons would be to display “relics”. Relics were the personal effects or the body parts of a saint, someone who Catholics believe to be so faithful that it is certain that they have gone to Heaven. To the peasants of the Middle Ages, a time fraught with pain and chaos where any real sense of order was held together by the whims of the powerful, the chance to see a lock of hair or set of robes or part of the skeleton of one of these departed faithful must have been a reminder of a better life waiting for them if they kept their faith in God. Relics were relief to the masses, and a lucrative tool for both priests and the individuals that could procure them.

A whole industry sprang up that provided these items to churches that competed for the chance to display them. According to the Metropolitan Museum of Art, “Some relics were even stolen from one church, only to find a new home in another, those of Saint Mark in Venice, Saint Nicholas in Bari on the Adriatic coast, or Saint Foy at Conques being among the most famous examples.” The Vatican itself played directly into this industry by making it a requirement that altars be consecrated by relics. It is stated that “[ . . . ] from the time of Charlemagne, it was obligatory that every altar contain a relic [ . . . ]”, and Atlas Obscura says that “[ . . . ]the Catholic Church didn’t stop requiring all altars to house relics until 1969.”

Consider the problem inherent here. This was a time where simply moving from town to town could be a dangerous journey. Oversight was limited. Demand for these relics were high, and news traveled slowly from region to region. With enough skill and knowledge, or ignorance on the part of the priests purchasing them, relic procurers could pass off false items as the real thing. VICE News states that “[i]n Austria, there was once an edict that required “proper provenance” to be shown whenever one was sold (“provenance” meaning “paperwork”). But those documents could easily be falsified [ . . . ]” Considering what was being passed off, it has to be asked… where did the bones come from? The mind goes towards images of grave-robbing. The Middle Ages were a time of many unknowns. It is not at all farfetched to say that several people were laid to rest, dug back up several years later by individuals passing through, and then passed off piecemeal to several different dioceses as the remains of long-dead saints. After all, this was how the genuine relics were acquired. Atlas Obscura explains that “[ . . . ] Rome the Eternal City—with its cemeteries, ruins, and stature as the seat of Christianity—was the ultimate treasure trove. Certain popes however, placed restrictions on the trade; largely because of the uproar of Roman citizens who were tired of foreigners looting their cultural heritage.”

Another explanation for false relics is that animal remains were passed off by unscrupulous sellers or misidentified by worshipers. VICE points to the story of Saint Rosalia’s relics as an example. “In the Sicilian region of Italy, in the town of Palermo, [ . . . ] inside a small shrine, lie the bones of Saint Rosalia. [ . . . ] Just one problem: The bones in Saint Rosalia’s shrine belong to a goat. This revelation came in 1825, from British geologist William Buckland, who [ . . . ] made an examination of the relics and determined them to be “non-human.” (Buckland also concluded during the trip that dark spots on another church’s floor being presented as “drops of martyr’s blood” were, in fact, drops of bat urine.) But rather than fixing the mistake and getting rid of the goat remnants, the church has the same bones on display today.”

So, then, is the skull of St. Vitus in Old Town Bridge Tower really his skull? Probably. It was brought to the city by King Charles IV of Prague himself, and a king would probably have several Church officials with connections to Rome ready to confirm the authenticity of a relic. Similarly, the arm of St. Vitus was brought to Prague by Duke Wenceslaus of Bohemia, the adored “Good King Wences” who himself was a Prague local and was eventually canonized as a saint. Kings would have direct incentive to have their relics as verified as possible. After all, imagine the backlash from the Pope if he found that the nobility were displaying false remains. Still, there is the potential out there that several relics on display in the present day were pulled from desecrated tombs in the distant past and set up to help turn the minds of the faithful towards the grave. After all, the living world and what it can do to the bodies we leave behind is a distant concern in the afterlife.