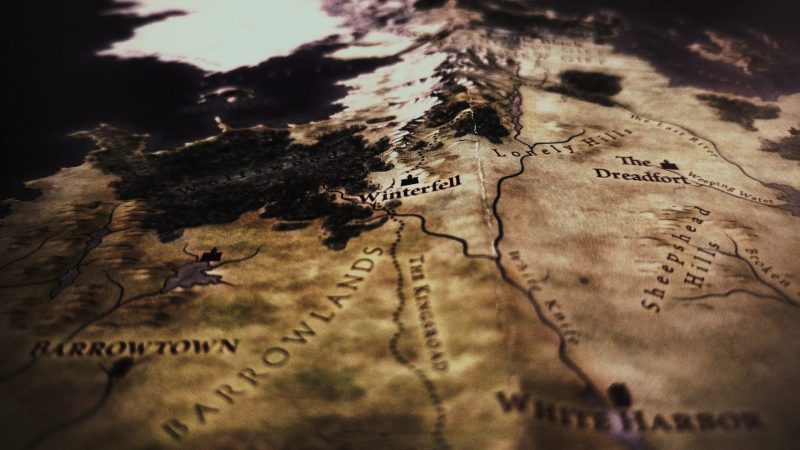 Game of Thrones is a hit television series produced by HBO. It was based on the series of novels by George RR Martin, A Song of Ice and Fire. The series follows characters from different noble houses, fighting and scheming for control of the Iron Throne of Westeros. The series is famous for its gritty violence, explicit sexual content and a willingness to kill off even main characters. Writer Zach Epstein summarised in his 2015 interview with George RR Martin, that “No one is safe”, click here to read Epstein’s full article.

Game of Thrones has won countless awards and holds a number of records for television dramas. The show is set in the vast Kingdom of Westeros and beyond. Settings include desert lands, mountainous regions, and medieval cities. The team behind Game of Thrones filmed in over six different countries including Northern Ireland, Croatia, Iceland, Spain, Malta, Morocco, and Canada. During this blog, Mysterium Tours will explore some of the filming locations you can visit today in Northern Ireland.

Game of Thrones; The King’s Road

The King’s Road runs the length of Westeros, from Castle Black at The Wall down to the capital city, King’s Landing. Arya Stark escapes from King’s Landing in the first episode of the second series. She is disguised as a boy to hide her noble heritage. The overhanging trees and unerringly straight road creates an atmospheric and impressive filming location.

The King’s Road was filmed in County Antrim, near Armoy. The real location is called Bregagh Road and Game of Thrones fans can visit the site today. Bregagh Road is also known as “The Dark Hedges”. The Beech Trees were planted to provide an impressive entranceway to Gracehill House, a Georgian Mansion. The road is now pedestrianized to prevent congestion, but visitors to this location can park at The Hedges Hotel for a fee. 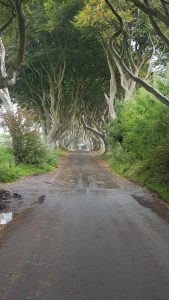 Game of Thrones; The Greyjoy’s Castle and The Iron Island

House Greyjoy are the rulers of the Iron Islands in Game of Thrones. The Iron Islands host a tough, seafaring nation known for their hardiness and naval prowess. The Iron People can perhaps best be described with a quote from Balon Greyjoy, “We are ironborn. We’re not subjects, we’re not slaved. We do not plow the field or toil in the mine. We take what is ours.”

The Greyjoy’s castle is set on a harsh rocky outcrop overlooking the Atlantic Ocean and the real castle can still be visited today. The impressive ruins of the castle are located on the coast of Northern County Antrim. For the exact location of Dunluce Castle, click here.

The castle was constructed in the early sixteenth century, by the Macquillan dynasty. It has a mysterious and bloody history that the Greyjoy’s themselves would be proud of. It was invaded and taken by the rival Macdonnel clan in 1550 and even lost the castle’s kitchens during a stormy night in the seventeenth century when they collapsed and fell into the sea. 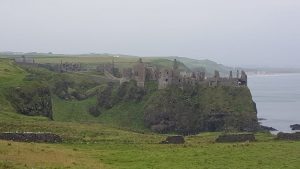 Game of Thrones; North of the Wall

The real forest was filmed in Tollymore forest, Bransford Road, Northern Ireland. For the exact location of the park, click here.

The park was designed by Thomas Wright in the eighteenth century. Wright was a friend of the owner of the land and wanted to create an enchanting and impressive forest garden. The park has a great range of natural beauty including monkey puzzle trees, eucalyptuses, and giant redwoods.

Game of Thrones; The Dothraki Grasslands

The Dothraki Grasslands are the home to the Dothraki people in Game of Thrones. They are a brutal nomadic tribal people who are famous for their proficiency in horse husbandry. It is said George R.R. Martin based the Dothraki on Genghis Khan’s Huns. These horse-backed hunters roam the dangerous Dothraki Grasslands, which can be visited by tourists today.

The Dothraki Grasslands are located in Binevenagh, Northern Ireland. Tourists visiting can enjoy a six-mile hike up the Magilligan peninsula through stunning forest land and be captivated by the impressive views.