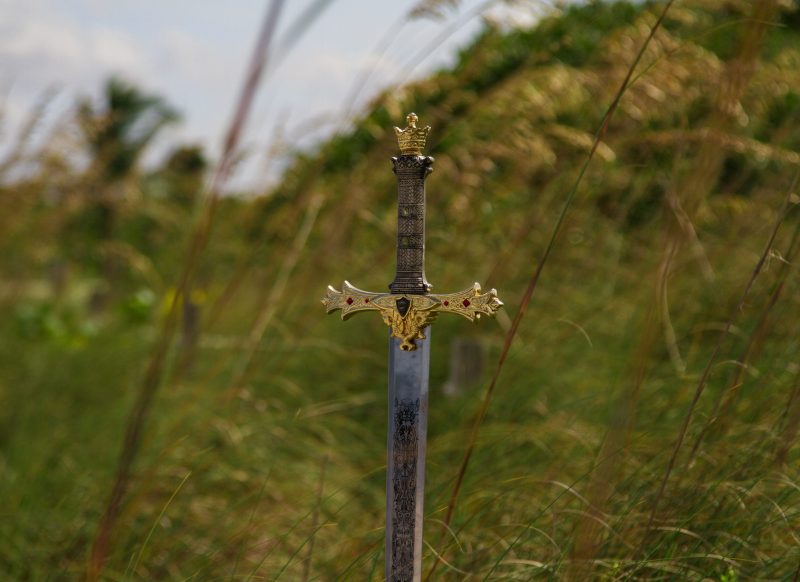 King Arthur has a collective place in the archetypal memory of Albion. He is historical and fabled, reality and fiction, both mythical and legendary. Whether King Arthur was a real historical figure, is a question that has divided scholars for decades.

Archaeologist Nowell Myres had this to say on the subject of King Arthur, “no figure on the borderline of history and mythology has wasted more of the historian’s time.”

A fairly damning indictment from Nowell…

I, Sebastian Doyle, would ask whether the real question is whether the man truly begat, but rather, what was his legacy? 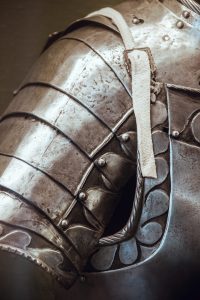 Where did we first hear of King Arthur?

Welsh Monk Nennius first wrote of King Arthur in 830 AD in his compendium, “Historia Brittonum”. Interestingly, he described Arthur not as a King, but a Warrior. Nennius also advised Warrior Arthur had a dog bred to hunt boar named “Cavall”.  Unfortunately, Cavall does not seem to have survived the writings of Monk Nennius to evolve into popular legend.

The first telling of King Arthur and his adventures was in Sir Thomas Malory’s 1485 epic, Le Morte D’Arthur. Tennyson further immortalized Arthur in his poem Idylls of the King.

The Sword in the Stone

If you think modern politics is confusing, Arthur’s ascent to the throne is downright bewildering. It is Christmas Eve in Chiusdino, Italy. Chiusdino is a small village nestled in the Metaliferrous Hills, overlooking the Val di Merse. The hour is late and a cold wind blows down from the hilltops, the first flakes of snow of the season begin to fall.

In the center of the village sits the quaint Montesiepi Chapel, its rounded towers and squat structure is typical for the architecture of the period. In the courtyard of the chapel, as if by magic, appears a mighty anvil with an ornate sword embedded in the rock, this, is The Sword in the Stone.

Merlin, a local wise man is sent for to explain this mystery. After inspecting the stone, the intricate handle of the sword and the keen blade, Merlin declares that he who is able to pull the sword from the stone will become the next true king. Strong men of high status from across the land travel to the Merse Valley, they heave and strain, they groan and grunt, but the sword remains unmoved.

Finally, a young boy, no older than fourteen winters arrives at the chapel. This young boy has no land, he has no titles, but he will become the one true King. The boy steps up to the stone and places his hand, which does not shake, on the pommel of the sword. The handle seems to hum in anticipation and the blade slides easily out of the stone. This boy is Arthur, future King of Albion.

Arthur established a just and fair court to rule the land of Albion, the deeds of himself and his Knights would echo down through the halls of history. Camelot was said to be located in the British countryside, with plenty of space for hosting tournaments for great Knights. 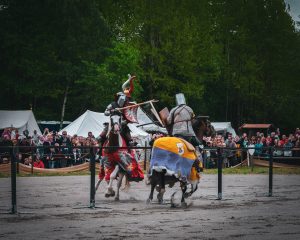 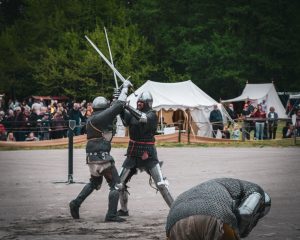 Cadbury Hill is located five miles North of the city of Yeovil. On this hill has been found the remains of an Iron age fort that some think could have been Camelot. The scale of the reoccupation of this hill fort in the fifth century, was as such that it could only have been completed by a High King with a lot of power, this makes Arthur a potential candidate. It is certainly located in an advantageous strategic position and it is thought King Arthur may have used this site to defend his Eastern frontier. Visitors who climb Cadbury Hill today are rewarded with fantastic views of the surrounding countryside. When the wind blows in the right direction, those with an ear to hear will perceive the sounds of clashing blades and the cheers of tournament patrons from centuries gone by.

For the map reference for Cadbury hill please click here.

King Arthur and The Battle of Camlann

In the Camlann Valley, two great armies line up to do battle. The infantry phalanxes stand in their regiments one hundred metres apart, close enough to see the whites of their opponents’ eyes. There is no cheering or hurling of insults from the ranks, these are well-disciplined troops, drilled and competent in the art of war.

A small unit of heavily armed knights ride into the center from both armies. King Arthur and his most trusted lieutenants ride forth to parlay with Arthur’s bastard son, Mordred. Both leaders know the greatest battle is one that is not fought, if bloodshed can be avoided today, it will be.

The infantrymen are too far back to hear what is being said but they strain to read the body language of the war leaders. The talk seems to be going well. No weapons have been drawn and there is no shouting or challenges issued. Perhaps nobody need die today.

It is the height of Summertime and the sun beats down on the valley. Nesting in the long grass, enjoying the warm weather, a common Adder basks in the glorious weather. Unbeknownst to all, this common snake will change the course of history. A heavily armored horse hoof thuds into the ground next to the snake causing it to rear up in surprise. One of Arthur’s lieutenants draws his sword to kill the serpent.

Mordred’s infantrymen squint into the sun, the peace talks seem to be going well. Without warning one of Arthur’s lieutenants draws his sword. The command is given to charge. The valley is turned into a bloody chaos and hell descends on the field.

King Arthur’s great sword Excalibur had been enchanted so that he could never lose a battle. The scabbard is enchanted as such that the wearer may never die. During the fighting Arthur’s scabbard is cut away and the magical protection he enjoyed is lost. King Arthur wins the battle, but the wounds he sustains will ultimately kill him.

Arthur lies on the ground surrounded by his most loyal knights. He bleeds from a thousand tiny cuts and feels as though something inside of him has burst. Arthur knows that he is dying. Arthur has lived a blessed life and walked a path never previously trod, but I would challenge any man to not feel fear at this moment.

The Returning of King Arthur’s Excalibur

“Of course my liege”, Sir Bedivere’s heart breaks as he looks upon his King.

“Take this, it must be returned from whence it came. Take it to the Isle of Avalon in the next valley and cast it into the lake”, Arthur hands over the enchanted Excalibur.

Bedivere rides to the lake Arthur had described, it is only a short journey. He stands at the edge of the lake, listening to the water lap at the embankment. He takes the sword from his pack and goes to cast it into the lake. The sunlight catches the blade that is always keen, it seemed a shame to throw such a fine blade into the water. Besides, this sword was a piece of history and should be preserved, Bedivere returned the sword to his pack.

“Yes my liege”, Bedivere cannot look his King in the eye as he lies.

Bedivere is a little confused by the question, “Well, it splashed my King, it sank, and then the lake was calm again”.

“Return to the lake Bedivere, cast Excalibur into the water, it must be done.” Arthur orders.

Bedivere once again stands beside the lake. He holds the mighty Excalibur aloft and admires the blade for a final time. He casts it deep into the water. The sword arcs through the air, an arm emerges from under the water to catch the blade. Excalibur has been returned to the lady of the lake.

Geoffrey of Monmouth wrote that Arthur did not in fact die of his wounds, he was taken to the mystical Isle of Avalon to be magically cured. It was written by William of Malmesbury in 1125, “But Arthur’s grave is nowhere seen, whence antiquity of fables still claims that he will return.”

Perhaps, in Britain’s hour of need, King Arthur will ride once more.