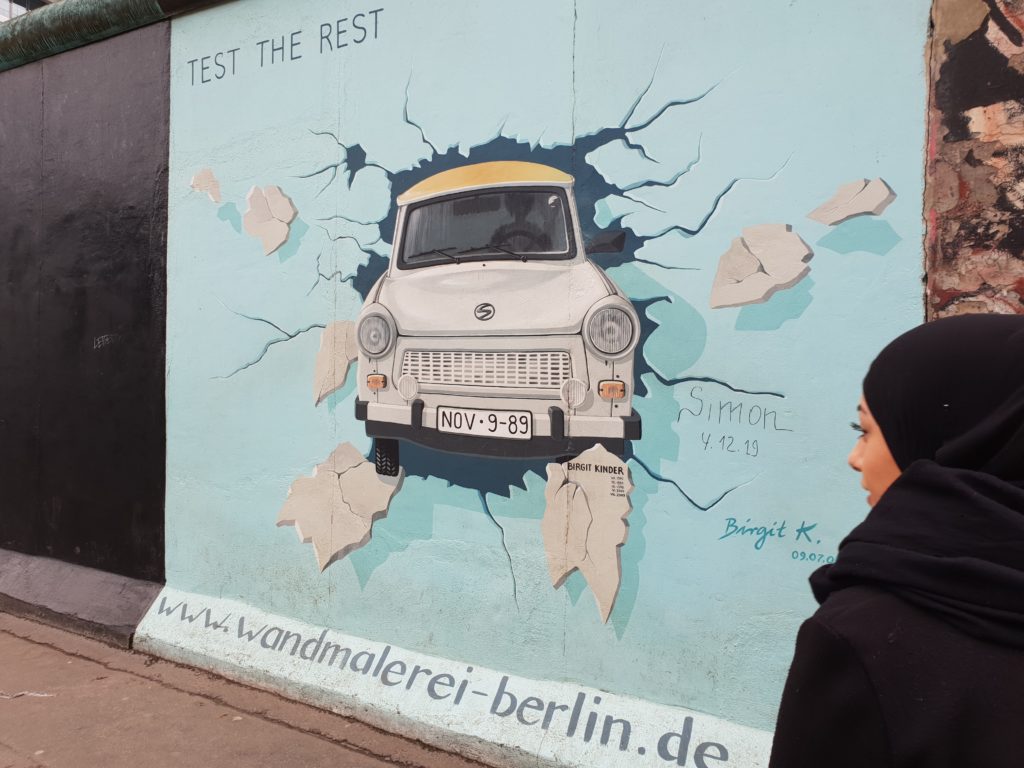 Perhaps what I find most shocking about The Berlin Wall, is how recently it was in operation. The city of Berlin, divided in two by this concrete structure, represented the front line in the cold war between two different ideologies. On the Eastern side was the communist powers known as the Soviet Union. On the Western side was the allied forces of Europe and America fighting under a flag of capitalism and freedom.

Conditions in the Eastern block provided a poor standard of living. There were few luxuries available to the population and the regime ruled with an iron fist. Between the years of 1949 – 1961, the people voted with their feet. Around 2.7 million people migrated from Soviet Union countries to Western Europe. The Communist regime was facing a disaster. If this trend was allowed to continue there would not be enough workers left to provide infrastructure to the country.

The building of The Berlin Wall

It is reasonable to say very few people saw it coming. The drastic action of installilng a physical barrier between East and West Germany was both sudden and shocking. On 15th June 1961 Walter Ulbricht, chairman of the GDR had this to say on border policy, “No one has the intention of erecting a wall”. Despite these reassurances just two months later on August 13th construction of the wall began.

Overnight soldiers on the Eastern side began destroying roads that would cross over into West Germany making them impassable to most vehicles. Armed soldiers lined the route where the wall would be built and closed the border. Over the next few days, miles and miles of barbed razor wire was un-spooled reinforcing the German position. Construction with concrete blocks began as soon as August 17th. There was now a physical front line in the war between East and West Germany. The silver tongued Churchill who was never short of a word or two described this as “an iron curtain” that had descended across Europe.

Going over the Berlin Wall

As situations continued to deteriorate in East Germany, there were increasing attempts to cross the wall and escape the regime to West Germany.  It is unclear how many people died as a direct result of the wall and figures on this differ. This is partly down to an issue of defining what constitutes a death attributable to the wall.

Some data sets count drowning even if the victim was not an escapee, some omit suicides as a result of failing to cross the wall and other variables are treated in different ways. Between 1961 – 1989, depending how you define a victim of the wall, between eighty and two hundred and forty five deaths were caused as a result of the wall. I realise this is quite a range, the most reliable data set is probably a study by the “Centre for Contemporary History and the Berlin Wall Memorial Site and Documentation Centre”, they put the figure at one hundred and thirty six.

The first victim of the wall occurred almost immediately after construction. On August 22nd Ida Siekmann leapt from her fourth floor window onto the West German side of the wall from her apartment building. She landed badly and died of her injury en route to the hospital. It was just one day before her fifty ninth birthday.

On November 9th 1989 following significant diplomatic work and pressure from the people, an announcement was made by East German Official Günter

chabowski. He declared the following on National Radio, “Permanent relocation can be done through all border checkpoints between the GDR into the FRG or West Berlin”. Surely it couldn’t be true? Could it? Could the checkpoints really be open? Tentatively people began approaching the checkpoints and were shocked to learn they were indeed allowed freedom of movement.

The wall was torn down just as quickly as it had been built. The country was in an exuberant state and days of celebration began. During these parties the wall was destroyed and Berlin was reunited once more. As a consequence there is not a huge amount of the wall people can still visit today. However, Check Point Charlie, one of the military crossing areas remains and there is a museum on site dedicated to the wall. An Eastern section of the wall has also been transformed into an Art Gallery dedicated to freedom and liberation. The art takes the form of graffiti daubed directly onto a remaining section of the wall.