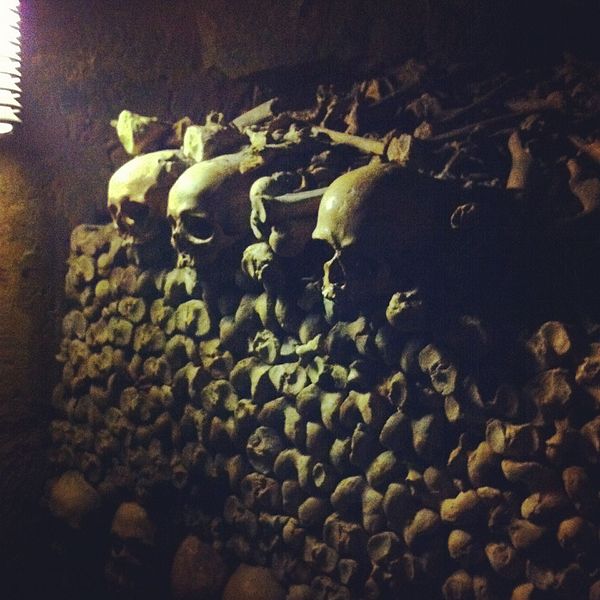 To conclude the Body and Blood series, it is important to take a look at one of the most major and well-known instances of Europeans using the remains of the deceased as a resource with which to improve their lives and create something important to them: the Paris Catacombs.

This is a subject that is as vast as the architectural structure itself, and as such there will be several different parts to this discussion, starting at their conception and construction and ending in some of the secrets they still hold (and have generated!) in the modern day.

The beginning of the Paris Catacombs is itself rooted in something discussed in the last article in this series: the Black Death. The Bubonic plague generated a massive amount of bodies in the crowded conditions of France. The University of Iowa states that the plague took a grim toll on the city that can only be described as catastrophic. “Half of Paris’s population of 100,000 people died.” As stated before, large piles of unburied bodies have a deleterious effect on the people around them and exponentially speeds up the spread of disease by vermin that are attracted to the decaying flesh. As a result, Paris decided to dump them all in a specific location that had supplied the city with burial plots for some time and do so for centuries to come. Bonjour Paris states that these “50000 [bodies] alone” were buried in “[ . . . ] one month during the Plague.”

Unfortunately for the city, this decision would eventually coalesce with other events through the nation’s history to cause a new problem four hundred years in the future. The main graveyard that supplied space for the capital’s bubonic dead continued to collect massive amounts of corpses as time went by thanks to the inevitable touch of death throughout the ages on Paris’ populace, and by the 18th century was bursting at the seams. For years, the Cimetière des Saints-Innocents had been a city-wide scandal due to poor management. Too many bodies had been stuffed into the overcrowded plots, to the point where coffins were bursting out from the earth in nearby areas. Bonjour Paris states that “[a]n estimation of 2,000,000 bodies had been buried in Les Innocents over the years [ . . . ]”, and as the Smithsonian describes it, “[t]hose living in the Les Halles neighborhood near Les Innocents, the city’s oldest and largest cemetery were among the first to complain, reporting the cemetery exuded a strong smell of decomposing flesh—even perfume stores claimed they couldn’t do business because of the off-putting smell. In 1763, Louis XV issued an edict banning all burials from occurring inside the capital, but because of Church pushback, which didn’t want cemeteries disturbed or moved, nothing else was done. Louis XVI, Louis XV’s successor, continued the crusade, also proclaiming that all cemeteries should be moved outside of Paris. It wasn’t until 1780, however, that anything was done. That year, a prolonged period of spring rain caused a wall around Les Innocents to collapse, spilling rotting corpses into a neighboring property. The city needed a better place to put its dead.”

The solution came in the form of a conceived massive underground ossuary.

An ossuary is a burial chamber specialized in displaying and holding bones, and with how many dead Parisians had been lingering in Saints-Innocents for decades, Paris had a lot of bones to work with. It is likely that many of these graves had had their individual markers lost due to the overcrowding and general poor upkeep of the cemetery.  Scientific American states that “[w]hile many couldn’t afford an actual plot, the majority of corpses ended up in mass graves that held around 1,500 people in each[,]” so many of them did not have these identifiers in the first place. Transformed by time into not so much the remains of the dead as they were a collection of bones, they were ready to be exhumed and have their former residents dumped out into a singular pile, the individual destroyed by time and human choice.

Something that quite literally embodies this transformation and destruction is a particularly gruesome detail regarding the breakdown of the bodies. During this excavation and preparation to build the ossuary, it was discovered that some of the bodies had turned into collections of fat, with some having completely dissolved into this gelatin.  According to Scientific American, “[f]or a body to fully decompose, oxygen must be present. In the case of the bodies from the Cemetery of the Innocents, the lack of enough oxygen left the bodies as mounds of fat.” Unable to do anything else with the bodies… and existing in a culture that also had medical cannibalism as an acceptable concept… the French government sold off the collected fat to be boiled by candle and soapmakers and sold back to the citizens of Paris, some of whom were no doubt descendants of the individuals who had been buried there.

Once assembled and prepared for use, the French government then proceeded to use the city’s old nearby limestone quarries in order to rehouse these bones. As the Smithsonian explains, “[s]o it went to the tunnels, moving bones from the cemeteries five stories underground into Paris’ former quarries. Cemeteries began to be emptied in 1786, beginning with Les Innocents.” This was not fated to just be a simple matter of removing and placing the bones into underground receptacles, but eventually became a major undertaking into creating a true wonder of the world buried deep underground. The French used the collected skeletons to create tunnels with walls full of skulls that were arranged into shapes and displays.  This was not just a place to cast off the forgotten dead, but to turn them into works of art.

While the eventual outcome of the Paris Catacombs is undoubtedly a gruesome spectacle, there are also works of sheer beauty within its depths that cannot be denied because of their material. If anything, some of the creations down there are improved by the sheer contrast that their beauty has with how they were made. There is more to the Paris Catacombs than just the art, however. There is a history there, full of events and secrets both as macabre and intriguing as the events that lead to its creation. Much of it is shrouded in mystery. As the Smithsonian explains, “[t]oday, a little more than a mile of the catacombs is open for visitors to explore. [ . . . ] The tunnels extend many more miles under the city, but it’s illegal to visit most areas.

“What is down there?”