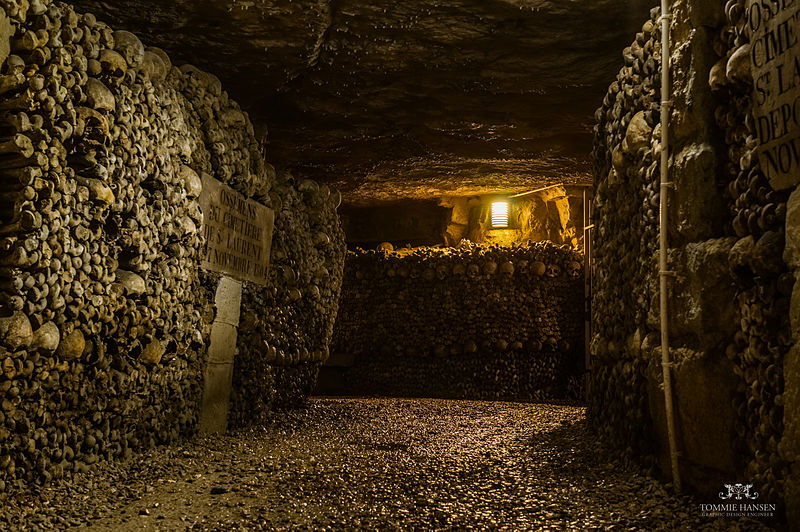 As discussed last week, the immense Paris Catacombs were created as a way to consolidate the many dead that had taken up the city’s Cimetière des Saints-Innocents somewhere where they would not start to intrude into the basements of the residents of France’s capital. After their initial purpose was fulfilled, they played host to a number of bizarre incidents. An air of mystery now surrounds them, considering how much of it is closed off to the public. Perhaps, other than their use today as a tourist site, one of their most well-known side-uses came during one of France’s darkest hours.

The invasion of France in World War II by Nazi Germany was a wake-up call to the nations of Western Europe that their initial attempts to head off a second Great War by allow Hitler to continue his annexation of the nations around him would only exacerbate the terrible situation that they faced. As a result of the Quislings’ appeasement policies, Germany was able to invade France with a force it was not prepared for, and as a result occupied the city.

The French did not take the atrocities that the Germans placed upon them standing down, however, and as a result a strong underground resistance developed in the country led by president-in-exile Charles du Gaulle. This resistance persevered despite the atrocities and executions carried out upon them by the Nazis, probably because of the fact that they were experts at secrecy and picking their battles.

Astute readers may wonder if last week’s previous topic, the French Catacombs, were destined to be made so that the French Resistance had somewhere to meet in and keep the spirit of the country alive. After all, they seem to be a perfect fit for quite literal underground meetings out of the eyes of others. Secluded, not well known by many, and twisting on for miles, the tunnels of the Catacombs bring up images of harried individuals trading plans amidst the bones before going out their business.

Those images conjured up by the Catacombs’ mystique are not just fantasy. They were real, although somewhat more complex than that. The Catacombs were not just the hiding spot of the French Resistance, and their mixed use is a testament to their sheer size.

The Nazis also started to use the tunnels when they came into the city as a way to consolidate their power, and began to build bunkers for their soldiers in the underground that connected to them. One central bunker was located under a Parisian school called the Lycée Montaigne. Le Parisien describes it and its connection to the catacombs. “Occupied at the time by the staff of the Luftwaffe (German aviation), the Lycée Montaigne, in the 6th arrondissement, still retains traces of the Nazi occupation … but 20 m underground, where the remains of a shelter built in 1941 are nestled. During the bombing, the officers of the staff retreated there in the company of the small staff. A whole network of undergrounds connected this shelter to others, in the basements of Paris.”  Atlas Obscura points to another underground bunker underneath the Gare de l’Est as evidence that the Germans were working in the area. ‘[ . . . U]nderneath the daily humdrum activity there exists a carefully maintained bunker, whose history is shrouded in secrecy. The underground space stretches across 1290 square feet below platforms 2 and 3. Half-finished by the French who designed it as an air raid shelter, it was completed by the Germans during the occupation of Paris, as seen by the inscriptions on the walls. The subterranean chamber’s purpose and the extent to which it was used is unknown, but the key location suggests it could have been an important hiding place.”

Yet despite the danger that had been added to the Catacombs by the presence of German soldiers, French Resistance members still found the shelter of the Catacombs isolated enough from watchful eyes to end up making it the headquarters of much of their operations. One of France’s greatest heroes of the occupation, Henri Roy-Tanguy, used the Catacombs to prepare for the Liberation of France. As the New York Times explains, “Mr. Rol-Tanguy [ . . . ] the leader of the Communist-led Francs-Tireurs et Partisans, or Snipers and Partisans, in the Paris region [ . . . worked] from a base in the catacombs of Paris [ and ] called on Parisians to take up arms against the occupiers one week before the liberation of Paris, on Aug. 25, 1944.” The University of Kent points to “[ . . . ] a medical student, René Suttel, [ . . . who] began exploring the tunnels beyond [the psychiatric hospital he studied at]. Over the course of the following year, Suttel and fellow student Jean Talairach would map out the limestone networks of the Grand réseau sud, the great southern network stretching across four arrondissements of the Left bank. Their nightly explorations resulted in an extraordinarily detailed plan, annotated with numerous entries, exits and shortcuts, along with the unexpected discoveries of sophisticated German air raid shelters constructed under the Jardin du Luxembourg and neighboring Lycée Montaigne”.

Over the course of a year, Suttel prepared this map for deliverance to the Resistance for further use. Combined with what has been learned about the Montaigne and Gare de l’Est bunkers, the Germans could have potentially have been planning a route out of the city or a way to use the Catacombs to dig in in the event of France retaking control of the cities. While the University of Kent also states that there is only circumstantial evidence that the Catacombs were used by the Resistance or German soldiers and that the conditions in the subterranean chambers were too cramped for any real activity, the existence of these bunkers and Rol-Tanguy’s actions organizing the Liberation point to the opposite, that there was at least a perceived importance there in the tunnels to the point where both sides kept a presence there and that the Resistance used it to effect to help save their country.

The Paris Catacombs had stopped being used long before even the first World War, but it still lingered under the city, waiting in its time of need to serve a different purpose. Like the Resistance that used it, it lingered and survived through the war through hostile conditions and now is remembered for its service during the conflict. Perhaps there are even still some hidden plans and artifacts from the operations underground, squirreled away in some alcove or behind some loosely packed stone.

There are other secrets down there, as next week’s article will show. Some of them are man-made. Some are even modern.