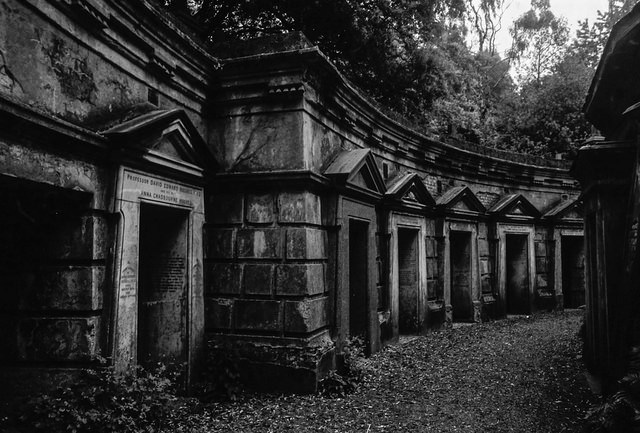 Highgate Cemetery in North London, opened in 1839 and famous for the last resting place of such notables as Karl Marx, Michael Faraday, Douglas Adams, Alexander Litvinenko and many others.

Is these days run under the auspices of the charitable trust The Friends of Highgate Cemetery and has been restored to its former glory but in the 1970s was a hotbed of supernatural goings on and the focus of activity of many groups in the area at the time dabbling in witchcraft, the occult and Satanism so it is not perhaps surprising that after decades of disuse and decline Highgate became the focus of the notorious Highgate Vampire.

Long before the tame offerings of American teen angst vampire series such as Twilight, the corpus of Hammer Horror films and the output of the rival Amicus horror franchise throughout the 1960s and 1970s created a huge revival of the Dracula mythos and interest in the occult generally and vampires in particular was at an all time high. Alongside this, North London became occult central and was home in the late 1960s to several covens run by the enormously successful and high profile High Priest and Priestess of British Witchcraft Alex and Maxine Sanders.

In 1968 the London Evening Standard published an article about an act of vandalism at Tottenham Park Cemetery which appeared to have been inspired by black magic. According to the report, on 31st October 1968, unknown persons entered Tottenham Park Cemetery, dug out a newly interred coffin and drove a sharpened iron bar through the lid and into the heart of the corpse. They also gathered flowers from the other graves and arranged them in a bizarre formation around the uncovered coffin. The newspaper expressed disbelief and bewilderment at this act of desecration. Some readers however felt less bewildered, believing that this crime may some how be linked to vampires. 14 months later the Hampstead and Highgate Express published a letter by local ghost hunter and paranormal investigator David Farrant who claimed that he had seen a tall grey, spectral figure standing in Highgate Cemetery on

The letter provoked a spate of responses from others who had claimed to have seen this and other strange phenomena in Highgate Cemetery. Shortly after Farrant’s letter was published, a second man, Sean Manchester, who was to later make himself a ‘Bishop’ in the Old Catholic Church and proclaim himself to be Britain’s pre-eminent and official Vampire Hunter, came forward to elaborate on the Highgate Cemetery story. He was interviewed by the same newspaper and his account was published on 27 February 1970. It was headlined with “Does a Vampyr Walk in Highgate?”. Manchester claimed that he believed a powerful black magician, who had been medieval nobleman in life, was buried somewhere in the grounds of Highgate Cemetery. He further explained that the nobleman had been resurrected by modern Satanist and his demonic form now stalked the cemetery at night.

The Hampstead and Highgate Express continued to cover the story over the following weeks, re-interviewing both Farrant and Manchester. On 6th March 1970, an article was published stating that David Farrant had found a number dead foxes in Highgate Cemetery whilst exploring there. Sean Manchester elaborated further by suggesting that these animals had been used as a food source for the vampire that inhabited the cemetery. Soon it was alleged the foxes were discovered with their throats slashed open and drained of all blood.

ITV, a national television channel in the UK, decided to broadcast a special program devoted to the story. It aired live on Friday 13th March, with outside reporting coming from Highgate Cemetery. Within hours the cemetery was mobbed by hundreds of Londoners, who, despite the best efforts of the police, climbed the gates and walls of the historic burial site and began frantically searching for the vampire among the ancient graves. Many had come armed with weapons, so that they could defend themselves in the event of an encounter.

Whilst it is certainly true that the majority of those Londoners who besieged Highgate Cemetery were acting from curiosity rather than fear, many who were interviewed at the scene expressed a desire to root out the vampire and put an end to its diabolical terror.

Photos of Highgate Cemetery by Andreas (Wikipedia) and used under an Attribution 2.0 Generic (CC BY 2.0).