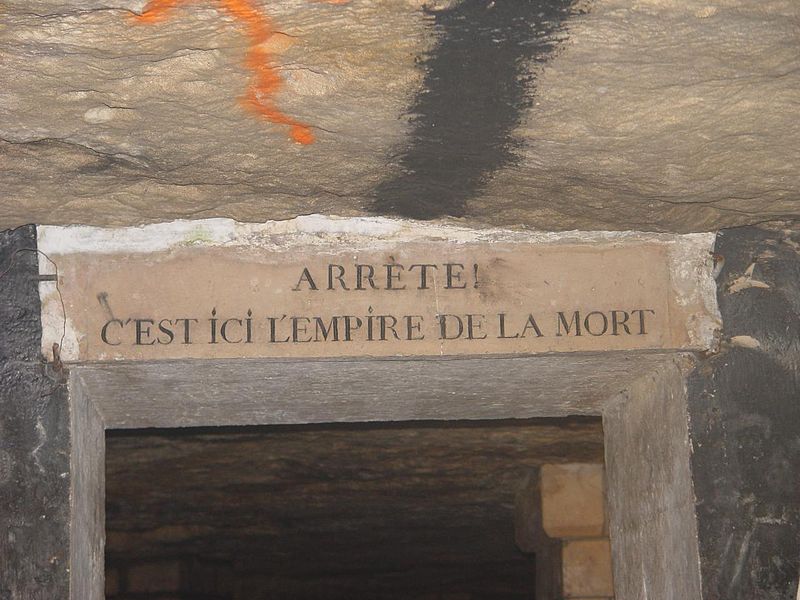 Continuing on from last week’s article on the Catacombs of Paris in the modern day, the underground subculture of Catacombs explorers known as cataphiles are well-known for their skill at moving through the catacombs, and for good reason.

An unprepared explorer of the tunnels who tries to stray from the public sections of the Catacombs is asking for trouble. In the gloom of the Catacombs, without a light or any idea where you are going, it is easy to get lost. Straying out of your intended path in the labyrinthine tunnels of Paris means potentially stumbling around in circles for hours, heading forwards and going nowhere as dehydration and exhaustion slowly set in. Throughout the ages, there have been stories of the horrible fates of those individuals who have managed to get themselves turned around beneath the catacombs and disappeared from history, ending up as lifeless as the bones around them. Some of them are more recent than others.

One particular and well-known case is that of Philibert Aspairt. Atlas Obscura states that, in 1793, he went down into the catacombs with a mission in mind. Atlas Obscura states that, “[i]t is thought that Aspairt went down the stairs into the catacombs one day, where he lost the light and could not find the way out. He died slowly and alone in complete darkness. It is not known why he went down, but some think that it might have been to try to break into the basement of the nearby brewery. It is an unfortunate fate, as Aspairt was only a few feet away from a staircase.” He had his body discovered eleven years after going down to the Catacombs, with a bottle of alcohol. Today, his headstone is now displayed within the catacombs and is a, “popular meeting place for cataphiles[ . . . ]”. Aspairt’s gravestone is a warning to anyone that seeks to explore the tunnels that knowledge of where you are and where you are going is important, as is having the right supplies. If your light runs out, your chances are not good.

That is, unfortunately, what happened in 2018 to two teens who found themselves trapped within the Catacombs by themselves.

According to the Guardian they stumbled around within the dark, “[ . . . ] lost for three days in the pitch-black tunnels of the underground burial ground.” In an isolated world like this, it must have been days and nights of sheer terror for the two. It’s cold down there underneath the sun’s light, something they must have felt severely before they were finally discovered, as they, “[ . . . ] were taken to hospital and were treated for hypothermia after being found by search teams and rescue dogs in the early hours [ . . . ]” of the morning. It can be considered miraculous that they were even found at all by city officials and rescued considering how many things were working against their survival. Unfortunately, this is a rather common occurrence amongst unprepared individuals. The Local points to another incident in 2011 where several drunk individuals went down into the Catacombs. “The group became separated with two managing to find their way out. The remaining three, all in their early 20s, were not so fortunate and spent two more days trying to find their way out [before being rescued].” While they ended up alright, it was possible that they would have suffered worse if they had not taken precautions to let investigators who were sent down know where they were. “Police eventually came across a piece of paper left by the three which said they were lost and that they had headed towards the south of the tunnel network.”

Others have not been so lucky. One particularly infamous video, shown on the US cable channel ABC Family and apparently found on a camcorder discovered within the tunnels, purports to show the final fate of an unknown individual exploring by themselves and filming their trek through deep corridors. Perhaps they were using their camcorder’s night vision as a way to see in the darkness. Eventually, as the Daily Star describes from the footage, “[ . . . ] the man appears to become more panicked as he tries to find his way back out. Eventually he drops the camera, leaving it rolling as his footsteps disappear off into the darkness, never to be heard from again. The camera was found by a subsequent group of explorers, who reportedly took the tape to authorities.” While the veracity of the video itself is debatable, it provides a vivid example of the dangers of explorers disappearing within the tunnels, and the fact that not everyone who has died within the Catacombs has had their lifeless bodies recovered. Some have just vanished completely.

Although they might no longer be used to bury bodies, the Catacombs still make up a part of what Paris is, providing France with history, culture, and a modern use that enriches the country. For a city steeped in passion and blood, the underground tunnels provide a link back to a past where Europe found itself the captive of death. While Europeans may now live in peaceful times away from the cruelties of war and plague, and the breaking of the Catholic Church’s political power across the region may have helped remove the economic incentives and opportunities that death brought to the region, the lifeless still holds the European imagination captive, and all who see the reminders of this previous history are invited to think about their own eventual fate. Death is the universal experience, the last great mystery, and all of us will have this mystery revealed eventually.