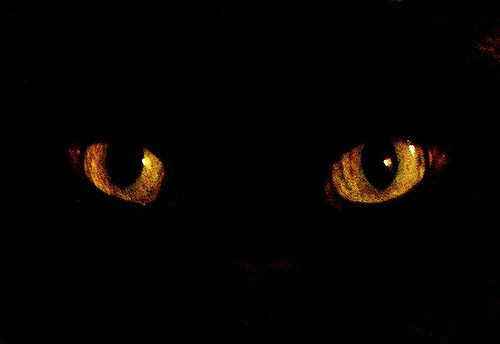 I married early, and was happy to find in my wife a disposition not uncongenial with my own. Observing my partiality for domestic pets, she lost no opportunity of procuring those of the most agreeable kind. We had birds, gold-fish, a fine dog, rabbits, a small monkey, and a cat. This latter was a remarkably large and beautiful animal, entirely black, and sagacious to an astonishing degree. In speaking of his intelligence, my wife, who at heart was not a little tinctured with superstition, made frequent allusion to the ancient popular notion, which regarded all black cats as witches in disguise.

Pluto—this was the cat’s name—was my favorite pet and playmate. This is an extract from the opening of the famous horror story The Black Cat by Edgar Allan Poe. This terrifying tale infuses an apparently ordinary story with horror and mystery, through the figure of a black cat with a single, evil eye.

The cat has always been associated with dark magic, and black cats even more so. Even these days, in the 21st century, there is a day dedicated to the black cat. Every year on the 17th of November, these felines are remembered and celebrated.

But why the need for such a day? Unfortunately, it turns out that every year about 3000 black cats disappear in Italy. This number reaches a peak in the run up to Hallowe’en on October the 31st. It is believed that these animals are usually offered as a sacrifice to the devil, although many may also be killed out of superstition.

One cannot deny feeling uneasy when a black cat suddenly crosses the road in front of you. Should you continue or wait for someone else to pass first? In the end, so as not to seem crazy, we continue on our way. Yet we are ready to blame the cat should anything nasty happen in near future…

We have inherited the idea of ​​cats as magical beings from the Middle Ages. In those days, they liberated cities from one of the most widespread threats to health and food conservation: mice. Yet some medieval authors gave this natural instinct a sinister twist, suggesting that cats catch mice in the same way that the devil seizes souls.

According to one twelfth century author, during Satanic rituals “the devil comes down like a black cat in front of his devotees. The worshipers turn off the light and approach the place where they saw their master. They look for him in the dark and when they find him they kiss him under the tail”.

In medieval times it was believed that witches had the power to adopt the appearance of a cat. This led Pope Innocent VIII to suggest that the cat was the devil’s favourite animal and the idol of all witches.

These days, the inhabitants of modern Madrid are nicknamed ‘gatos’, the Spanish word for cats. Given the animal’s dubious history, how and why did this come about?

The Madrileño’s positive attitude towards cats reflects Islamic thought, which praises the cleanliness of cats above all other animals.

As well as belying Madrid’s Arabic past, the nickname originates from a specific historical event. On the site of Madrid’s royal palace there once stood the Alcázar, a Muslim outpost built in the ninth century by Muhammad the first of Córdoba. In 1086, King Alfonso VI of Castille planned to take this fortress in order to safeguard the city of Toledo. However, when he and his army arrived under the near-vertical walls of the muslim city of Madrid – then known as Mayrit – he realized that the conquest would be more difficult than expected.

Suddenly a young man presented himself before the king, claiming to be excellent at climbing. He offered to scale the ramparts and secure a rope that would allow the rest of the soldiers to climb up. The king accepted his proposal and, under the cover of darkness, the mission was accomplished.

Seeing the young man scale the wall, using only his dagger to help, the rest of the soldiers exclaimed in a single voice: “He climbs like a cat!”

The city was taken thanks to this young soldier, who from that day became known as “the Cat”. In time the young man even changed his surname to “Gato”, and it is believed that those who bear this name today are his direct descendants. These family members became noble thanks to their founder’s agility, and their family shield depicts a wall and a dagger.

By extension, all Madrileños have since become known as Gatos.

Whilst this feline legend has a happy ending, other stories offer us a much darker perspective of this mysterious animal. Such as the legend I will tell you about next week, in which cats… Well, you will just have to wait and see!