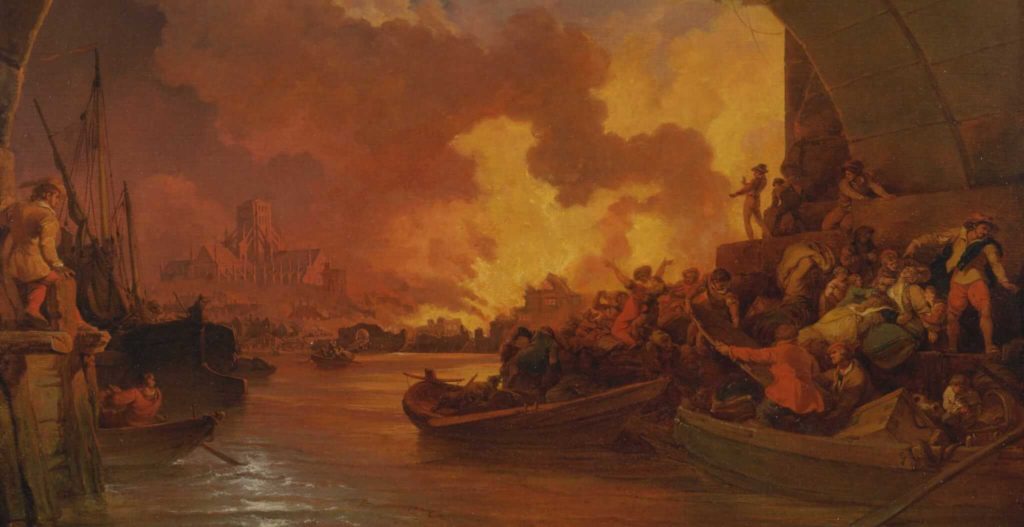 The Great fire of London

The city of London, that has stood for almost two thousand years, was brought to its knees in 1666 during The Great fire of London. The city was nearly completely destroyed. The fire ravaged 436 acres of the capital city. It destroyed over 13,000 houses and dwellings. It caused the collapse of 79% of the cities ancient churches and cathedrals. The Great fire of London reduced to rubble more of the Nation’s Capital than the Blitz did during World War Two.

The butterfly effect is a poetic way of looking at causality. It is the idea that the air disturbance caused by a butterfly flapping its wings in Brazil could cause a tornado in Texas. It is the idea that all actions, no matter how small, can have effects that reverberate through History. Today, we will consider how a small fire in a bakery on Pudding lane, could spread to set one of the greatest cities in the world aflame.

The spark that would light up the night

It is September 1st and the year is 1666. Thomas Farrinor steps out onto the street of Puddling Lane, it is late evening but Thomas cannot help marvel at how mild the weather is. Usually this late in the season, the cold would have been creeping in and rainwater would sluice the gutters. Not this year though. The air had remained clement and the city was dry as bracken. He steps back inside his bakery and shuts the door, locking it tightly.

Farrinor rakes the coals in the hearth to the side, as he has done a thousand times before. He retires upstairs to his chamber. Farrinor is awoken in the early hours of the morning by his manservant and his maid.

The fire from the coals had spread quickly consuming the downstairs bakery. The stairs to exit the dwelling were impassable. Thomas Farrinor escaped out of an upstairs window onto a neighbours balcony. Farrinor escaped with his wife, his daughter Hanna and his manservant. His maid was not so lucky. She became the first victim of The great fire of London and sadly History does not even recall her name.

Samuel Pepys was an elected member of parliament who rose to the rank of Chief Secretary to the Admiralty, even with no former maritime experience. He is most famous though for the diaries that he kept. He kept committed and detailed notes of his time working for both King Charles II and James II. His notes remain one of the leading primary sources for students of History keen to learn about the Restoration period.

During the fire he was awoken by his serving girl at around 3am on the morning of September 2nd. In the distance, he could see the glow of flames lighting up the dark night. Samuel Pepys reflected on the tragedy of people and pigeons losing their homes in his diary:

“So I rode down to the waterside, . . . and there saw a lamentable fire. . . . Everybody endeavouring to remove their goods, and flinging int

o the river or bringing them into lighters that lay off; poor people staying in their houses as long as till the very fire touched them, and then running into boats, or clambering from one pair of stairs by the waterside to another. And among other things, the poor pigeons, I perceive, were loath to leave their houses, but hovered about the windows and balconies, till they some of them burned their wings and fell down.”

King Charles II and The great Fire of London

I made reference to King Charles II in my recent blog about Lichfield Cathedral. I referred to him as, “The heavy-whoring never-boring Restoration King Charles II”. He certainly had something of a party boy reputation, but perhaps I was a little harsh. His reaction to the fire was spot on. He swiftly granted authority to the mayor and local garrison commanders to pull down buildings in a bid to prevent the spread of the fire.

Charles II met with refugees, cheered on fire marshals and even joined bucket passing chains. Derek Wilson writes a fantastic account of Charles II and The Great Fire of London, “Charles was everywhere. For more than 30 hours without a break he rode about the northern parts of the capital, which had so far avoided the flames. He sent word downriver to the dockyard for bread to be brought from the navy stores to feed the homeless and destitute.” Wilson’s article “Charles II: The great Fire of London’s forgotten hero?” is a great read and is available in full here.

If you alight at the underground station of Monument, you are able to visit Puddling Lane today and see the memorial to The great Fire of London. The monument itself is built atop the site of the first church to be destroyed on that fateful September night in 1666, St Margarets on Fish Lane. It is a mighty pillar standing 202 feet tall. It stands this height intentionally, as it sits exactly 202 feet away from Thomas Farrinor’s bakery on Pudding Lane.

My favourite inscription can be found in Latin on the South side of the Monument. It is something of an ode to Charles II’s actions during the week that London burned.

“…He [Charles II] also established an annual service of intercession, and caused this column to be erected as a perpetual memorial to posterity. Haste is seen everywhere, London rises again.”