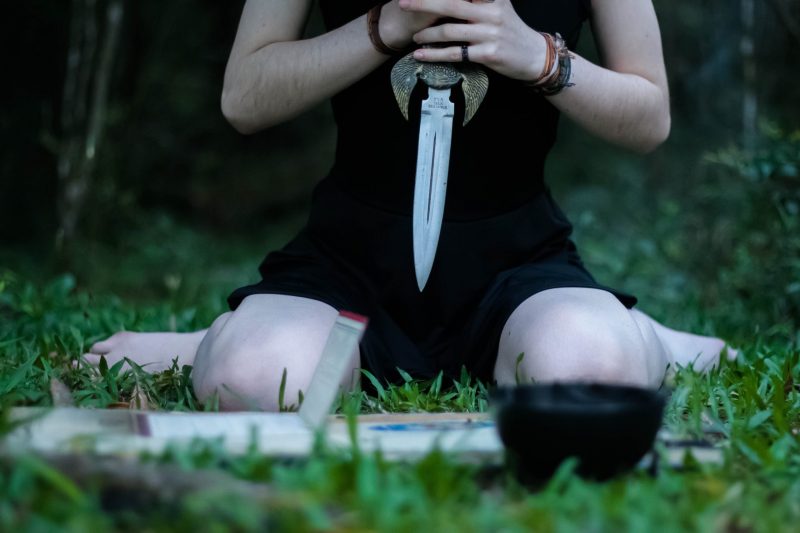 The practice of witchcraft was made illegal in England in 1563. Witchcraft was considered immoral with severe penalties prior to 1563, from 1485 hangings and burnings of witches became common. Women without husbands with a lowly status were particularly vulnerable to accusations. The best and somewhat vague estimations conclude, “tens of thousands” of witches were hanged or burned alive during the witch trials in Europe. 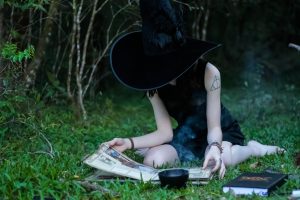 Pendle Hill is a beautiful and picturesque area of Lancashire, England. When I visited, I watched a young couple walk hand in hand to the crest of the hill to witness the setting of the sun, they can see nothing but rolling hills and a happy future. I, Sebastian Doyle, can see the dark cloud of history hanging over this hill, for ten people were hanged for the crime of witchcraft in the neighboring village.

The spark that ignited the pyre. 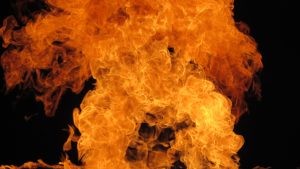 The year is 1612 and Alizon Device is walking in Trawden forest, it is early Spring and the trees are alive with blossom. Forests are not considered a place of beauty at this time in history, but rather a dark haven of faeries, bandits and danger. Alizon is not skipping through this inspiring forest picking flowers, she walks with caution, aware of every danger, real or imaginary.

Further down the winding path through the trees, Alizon spies a tall, gaunt man with a large pack. He walks with the easy gait of a traveling merchant, accustomed to long days on the road, his impressive stride eating away the miles.  Alizon considers darting into the bushes to hide, but it is still light and the man does not seem intimidating.

John Law could see the young girl and he smiled warmly to her, trying to demonstrate he was no threat. From force of habit more than anything else, John begins his sales pitch, “Well hello young madam, I sell the finest fabrics and perfect pins for the sauciest of seamstresses, how can I help you today?”

Alizon giggles at the strange and theatrical man, “I would like a pin please, pilgrim”, unconsciously mimicking his alliteration.

“A single pin?!”, Law clutches at his chest in mock shock and horror. “My miniature Madam,  for such a small selection of specialty pins I could not possibly unload my pack. Good day.”

Law sells pins meant for seamstresses, although, he is aware of other uses for his merchandise. Pins were used in medieval England for medicinal witchcraft purposes. Pins would be used during the magical treatment of warts and blemishments and this was forbidden in Medieval England.

“Good Day Sir!”, Alizon says it curtly, she is angry, she only wanted a pin to fix her doll. As she walks away from the lanky stranger she furrows her brow, “I wish he would fall over a tree root!”, she whispers to the ether. She hears a thud behind her.

John Law was unnerved by the encounter, he didn’t think she was involved in any unlawful activity, but, who really knew these days? Besides, she hadn’t offered to pay at any point and a single pin was hardly worth unloading his pack, no, he had made the right decision.

Law walked on, putting the uncertainty behind him. Suddenly, his right arm began tingling, then numb…strange, he thought…I must be getting old…he laughed. Law shouted, “Too much travel!”, but the speech came out slurred. Law collapsed.

It is believed, although not confirmed, Law suffered a stroke on that beautiful Spring day in Trawden Forest.

How did this encounter equal witchcraft?

John Law never accused the young Alizon of witchcraft, however, her “guilty conscience”, led to her confessing. She declared that she had caused his stroke.

From Alizon’s false confession, twelve people were tried for witchcraft, ten were hanged. To learn more about the history of Pendle, click here.

The Last of the Witches to be tried in England

Shockingly, the last person to be arrested under the witchcraft act in England was as late as 1944.

Helen Duncan was a psychic medium who performed seances up and down the country. During a show on Copnor Road in Portsmouth, Helen dramatically revealed that the spirit of a dead sailor aboard the vessel had informed her that the HMS Barham had sunk. This information had not been released to the public and army officials were shocked that a psychic had revealed this. Helen Duncan was arrested under the witchcraft act on January 14th 1944.

Did Helen Duncan learn about the sinking of the HMS Barham through her Witches powers?

To be honest, no, she probably didn’t.