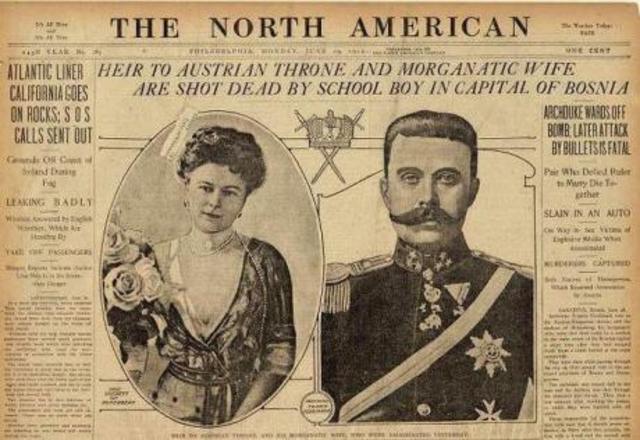 On the border, Croatia shares with Bosnia & Herzegovina nestles a small village called Obljaj (Pronounced “Ob-lee-aj” if you were wondering). It is a pretty little village. Home to around two and a half thousand residents, it is quaint. The houses are constructed from a mixture of stone and locally felled pine trees. Mountains are visible in the distance and there is a real sense of having escaped the hustle and the bustle of modern city chaos. It is a normal place. A safe place. It doesn’t feel like a place of heroes or villains, it doesn’t feel like a place where a gunman would be born who would fire a shot that would echo around the world, but it was, for this small village was the birthplace of Gavrilo Princip, the man who assassinated the Archduke Franz Ferdinand.

Gavrilo Princip was born in 1894 and the Europe that he would grow up in was very different to the Europe of today. There was no united Europe but rather a series of independent messy alliances. Making sense of these overlapping alliances is somewhat confusing. I would liken it a bit to the song “Dem Bones” written by James Weldon Johnson. For those not familiar with this song, it goes through a number of different bones in the human body and how they were connected.

Ankle bone connected to the shin bone”…You get the idea. Europe was similar to this. All of the countries were connected through contradictory and overlapping claims for territory and alliances. Two blocks had emerged of world super powers separating England, France and Russia from Germany, Italy and Austria-Hungary. Nationalistic feeling was growing in some of the smaller countries and the Balkans area was described as “a powder keg” due to its volatility. Gavrilo Princip would provide the spark that would ignite this powder keg and lead to The Great War.

Tension was in the air although nobody was acknowledging it, thought one of the Archduke Franz Ferdinand’s bodyguards. The Archduke shook hands with some local dignitaries in the city of  Sarajevo as he alighted the train. He waved to the strangely muted crowd waiting outside the station. There was a backdrop of serious tension to this visit. Nationalism had been growing in Bosnia and more people were crying out for independence from Austria-Hungary rule. It was a dangerous time for the heir to the throne of Austria-Hungary to visit this region but then, thought the bodyguard, perhaps that is why it was all the more important he did.

Crowds lined the street the motorcade would take to the town hall. The roof of the vehicle was to be kept lowered, to afford the eager onlookers with a better view of the royal. Unbeknown to the Archduke and his security team, six revolutionary assassins hid amongst the crowd. One of these men was Gavrilo Princip.

I wrote in a recent article about the hopeless randomness of it all in relation to the death of Alexander of Greece. You can read the full article here, but to summarise, the man died from being bitten by a monkey whilst exercising his dog. I concluded that when your time is up, it is up. Mitigating your risks as much as possible is definitely wise. Exercise regularly, eat healthy, get enough sleep. But when that monkey is going to jump on your back, there is not really a lot you can do. The assassination of Ferdinand feels a bit like that. There are so many ways it could have gone differently.

The couple had chosen today for their royal visit as it was their fourteenth wedding anniversary. They had been staying outside of Sarajevo for three days relaxing in the country side. They had even visited the city two days earlier for some shopping. Little did they know they were stalked by Gavrilo Princip. There had been concerns about the visit given the political backdrop. The Archduke’s wife, Sophie, had this to say on the Bosnian people, “You are wrong after all… Everywhere we have gone here, we have been treated with so much friendliness – and by every last Serb, too – with so much cordiality and warmth that we are very happy about it.

The 32-horsepower, four-cylinder, open topped Double Phaeton rolled through the streets. It was a beautiful day and the couple looked magnificent. The Archduke was dressed in full admiralty regalia and the duchess wore a white dress and a veil. They looked like a fairy tale couple and the crowd seemed to be thawing. Some people even began to cheer. The Archduke waved magnanimously.

The motorcade of six cars approached the first would be assassin, hidden in plain sight amidst the crowd. Mehmedbašić breathed deeply as the car approached. He reached inside his long coat and felt the heavy weight of the bomb he had concealed there. The car was twenty feet away. He breathed deeply. His heart pounded in his ears. His blood pressure climbed at a dramatic rate. Breathe damnit breathe he thought. The car was ten feet away. Mehmedbašić felt sick. His vision blurred. The car went passed him. The moment was lost.

Čabrinović was stood slightly further ahead of the planned royal route than Mehmedbašić. He saw his comrade panic. He saw his pale face, his shaking hands and he knew that he had failed the group. Čabrinović would not though. Čabrinović was a man of action. A calmness descended over him as he pushed through the crowd towards the road. Calmly he reached within his long coat and pulled the bomb, he struck the fuse.

Leopold Lojka was Ferdinand’s driver and he saw the commotion ahead. He saw the tall man pushing through the crowd. He saw him reach inside his coat and pull out a metal sphere. People pulled away from him in horror. A lady in the crowd tried to run and fell. Lojka reacted swiftly, he stamped the accelerator to the floor, the car lurched into action. He felt a bump. Heard an explosion behind him. What the hell had just happened? He heard someone screaming “drive, drive, drive” and was surprised to realise it was himself.

By the time the car reached Gavrilo Princip it was moving too fast for him to try and fire a shot. Would be assassin Vaso Čubrilović also did not make an attempt, “I didn’t pull out the revolver because I saw that the Duchess was there. I felt sorry for her.”

The car successfully reached the town hall and the Archduke was furious. The mayor knew something was wrong as the motorcade screeched into the clearing, but he did not know how wrong. The mayor began his welcome speech but is furiously interrupted by the Archduke, “I come here as your guest and you people greet me with bombs!”. The Archduke is fired up. He hears cheering from the crowds outside. He takes this to mean the people are celebrating that the attack was unsuccessful. Emboldened by the crowds support and concerned about the officers who had been injured in the bomb attack, he informs those present he will now be visiting the hospital. He doesn’t believe there is a real threat anyway, “Come on, that fellow is clearly insane, let us proceed with our programme”.

The assassination of Franz Ferdinand and his wife Sophie

It is agreed they will no longer visit the museum and they will go straight to the hospital. Nobody informs the drivers of this change of plan though and Lojka nervously sets off towards the museum. Internally questioning the sensibilities of returning to the route where they had just suffered a bomb attack.

The error was not realised until the car turned into Franz Josef street. With no reverse gear, the car would have to be pushed to be turned around. I doubt Princip could believe his luck as his target stopped, directly in front of him. He ran forward and fired two shots. One passed through the car door hitting Sophie in the stomach. The other caught The Archduke in his neck. Both Sophie and the Archduke Franz Ferdinand would die. His final words to his wife were “Sopherl! Sopherl! Sterbe nicht! Bleibe am Leben für unsere Kinde!” – Sophie, Sophie, don’t die, stay alive for our children.