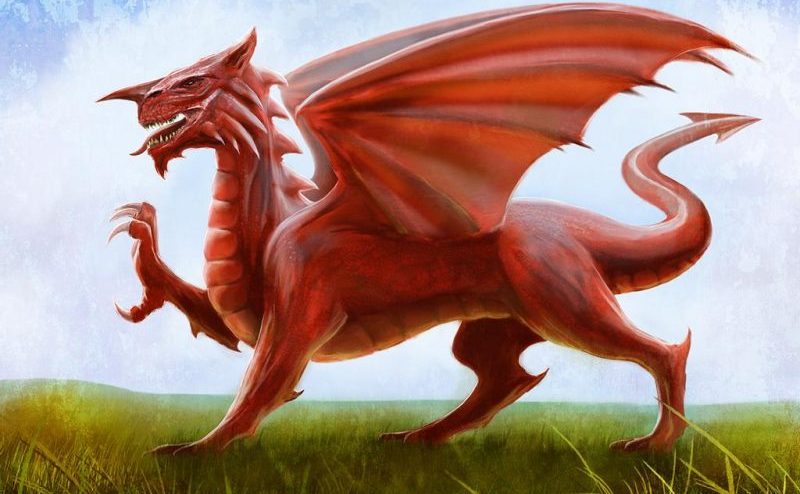 The Red Dragon of Wales

Wales is a beautiful country. From the rugged landscape of Snowdonia to the beautiful coastline of Anglesey, there is something in Wales for everyone. It is also a country of myths, legends, and magic. I mean its flag has a Red Dragon on it, you can’t get much more mythical and magical than that. Today we are going to look at the origin of the story of the Red Dragon of Wales.

Warlord Vortigern goes on the Run

Vortigern is said to have been a warlord in the fifth century. He makes appearances in a number of semi historical-sources such as Historia Brittonum, Ecclesiastical History of the English People and The Reckoning of Time. He is generally portrayed as a tyrant, particularly for his proud nature. Geoffrey of Monmouth, as usual, has something to say on the topic.

“At this time Vortigern was King of Britain; a man calculated neither for the field nor the council, but wholly given up to the lusts of the flesh, the slave of every vice: a character of insatiable avarice, ungovernable pride, and polluted by his lusts.” Say what you really think Monmouth?

King Vortigern had a way of rubbing people up the wrong way, but this time he had really rattled the hornet’s nest. He had been completing regular forays into Saxon territory from Wales stealing livestock, women, and anything else not nailed down. I have perhaps underestimated the Saxons, reflected Vortigern. Day by day they seemed to grow both in numbers and organizational prowess. They had driven him and his men from his land, humiliating as it was, he could no longer dismiss them. He needed to regroup somewhere safe. He needed a power base, a defensible position, he needed some breathing space.

The Winter had been cold and he had lost almost a quarter of his men to the biting winds and falling snowdrifts. Finally, though, he had arrived to the place at the edge of his map, the edge of the known world. He had arrived at the mountains by Beddgelert, regular readers will remember Beddgelert from The Famous Dogs from History blog post. The mountain was called Dinas Emrys and can still be visited today. Here would be perfect. Here Vortigern would build his hill fort and launch his counter strike against The Saxons.

The men made a good start building on the first day. Constructing the outer wall with stone mined from the nearby mountains. As the sunset behind the skyline, the men downed tools and retired to bed. The following morning the men arose, only to find their tools were gone and the walls had collapsed.

Vortigern, more than slightly vexed, commanded the men to do it again. But better this time. Once more the outer walls were raised and once more that evening they all collapsed.

There were a number of reasons the Gods could have been mocking Vortigern. He was said to have been extremely proud. He was a known where. Perhaps most damning there are even rumors he had defiled his own daughter. He was a pretty bad man. Reflecting on all of the reasons the gods may be forsaking him had Vortigern reaching for a flagon of wine and cursing. After draining this and a whole half of a second, he called for his lieutenant. Find me a sorcerer. We must ask the Gods what is to be done.

The Gods are consulted, through a suitable sorcerer who agrees to act as a conduit for the warlord Vortigern. The question to be asked is simple. “How can I build my hill fort?”.

What I love about old-school religion is how definite it is. Modern religions often fall back on more abstract advice, “Look to your heart”, “Be a good shepherd”, that kind of thing. Old Pagan religions are far more practical and prescriptive.

Vortigern was told in no uncertain times, “You must find a child”.

“Yes.” That would not be a problem.

“The child must be sacrificed and his blood spread onto the site for the hill fort.”

“The child must be borne of both woman and demon.” God damn it! Why could these soothsayers and seers never keep it simple?

A child born of a woman and demon

Vortigern’s men are sent across Wales to find such a child. Nunneries are consulted. Expectant mothers are interviewed. Finally, word comes that a Nunnery to the North has such a child. The mother is said to have written her name in Satan’s book and lay in the meadows with a cloven-hoofed satanic beast. The boy was left to be cared for by the Mother’s superior.

The boy, no older than ten is taken to Dinas Emrys where the warlord Vortigern wishes to build his castle. Although young, the boy speaks with a wisdom far beyond his short years. In some ways, Vortigern quite liked his confidence and eloquence. He was also a bit of an insufferable know-all though. Vortigern was not going to lose any sleep over killing the boy.

“As we stand atop Dinas Emrys, with the moon in her third house, we must first recall all the tales of the forest…” began the sorcerer. Vortigern tuned out. Trying to remember where his chamber was going to be build again. “As your mother made the beast with two backs with, well, a beast, with one back, but two horns”, what was the old man blithering on about, thought Vortigern? “As the heart pumps blood, lifeblood, red nectar, around the body, so your blood shall breathe life into the land!”, the sorcerer’s voice rose into a crescendo. He wielded an obsidian glass knife high in front of the moon.

The boy interrupts the Sorcerer

“Am I to understand you intend to kill me?” The boy asked. He didn’t sound concerned, worried, or scared, just mildly interested.

The sorcerer looked thoroughly annoyed. He had been getting into his rhythm and did not appreciate being interrupted. “Well, not kill, sacrifice, for the greater good.”

“Oh. Why’s that then?” The boy asked curiously, picking a blade of grass from the dark meadow.

“To spread your blood over on that field. So that we can build a castle there. Look you don’t need to worry about it it’s all organized.” The Sorceror breathed deeply ready to continue the ritual.

“To spread my blood on a field so that you can build a castle?”, the boy asked incredulously his eyebrows furrowed, “Well how’s that going to help?”. The boy had a point Vortigern thought, when repeated back it did sound more than a little insane. Still, Gods, mysterious ways, and all that.

“Because your father is a demon”, the sorcerer pointed dramatically at the boy, determined to resume some level of propriety and theatre.

“My mother told me my father was a baker who died of the sweating sickness when I was young.”

“Well can a baker not also be a demon?” Asked the sorcerer.

“I don’t know”, admitted the boy, “Look, where do you want to build a castle?”

“Over there”, Vortigern pointed.

“Well, that’s your problem. You’re building on a lake. Dig half a spade’s length down and I guarantee, you will find water.” The boy threw the blade of grass he had picked to the wind.

Vortigern watched the boy with interest as his men began to dig. The boy had wandered over to some horses and was calmly petting them. He fed one a sugar cube. He looked less like he was at the scene of his own execution and more like he was out for a nighttime stroll. What a weird child.

“Sire, we’ve hit the water”. How could the boy have known? The men continued digging all night. Eventually unearthing a large lake. The sorcerer sat on a rock, his knees up around his chin, sulking.

“How could you have known that boy?”, Vortigern asked the child.

“I listen to the land, sometimes it speaks to me”, the boy calmly replied.

What the hell did that mean, wondered Vortigern?

“Oh i’d be very careful doing that”, the boy said in his soft voice.

“Very careful indeed. Two dragons live in this lake. They may not be happy at being woken up.”

A Red dragon and a White dragon live in the lake

The men work for three full days draining the lake. Three full days of no walls being erected and the insufferable know-it-all boy smiling, smiling his stupid, simple smile. As the lake got lower and lower, it became clear there was no dragons living in the lake. When there was only a single puddle remaining in the mud, Vortigern marched over to the boy.

“Do you think to mock me? Your talk of listening to the land, of dragons. I do not need your blood anymore, which makes you useless. Why shouldn’t I kill you?” Vortigern demanded.

“I would not presume to advise such a great warlord as you Vortigern”, the boys’ eyes had gone cold and his voice hollow. Vortigern shivered in spite of himself. “Finish what you have started, drain the final water left in the lake. Do it now.”

As the final water is drained the two dragons appear. A red dragon and a white dragon. 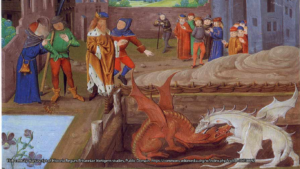 Who was the boy?

“The Red Dragon is the Welsh. The White Dragon is the Saxons. This is how the fight will be. When all seems lost, when the hour is darkest, we will rally. We will be victorious”, the boy told Vortigern.

Vortigern was stunned, “What is your name boy?”.

“I will have many names. But you will know me as Myrddin Emrys”.

Unfortunately, no evidence has been found of the dragons, but there may be some truth to the tale. In 1945 the site was excavated by archaeologists. A drained lake was found and the remains of a hill fort, dating back to the fifth century.