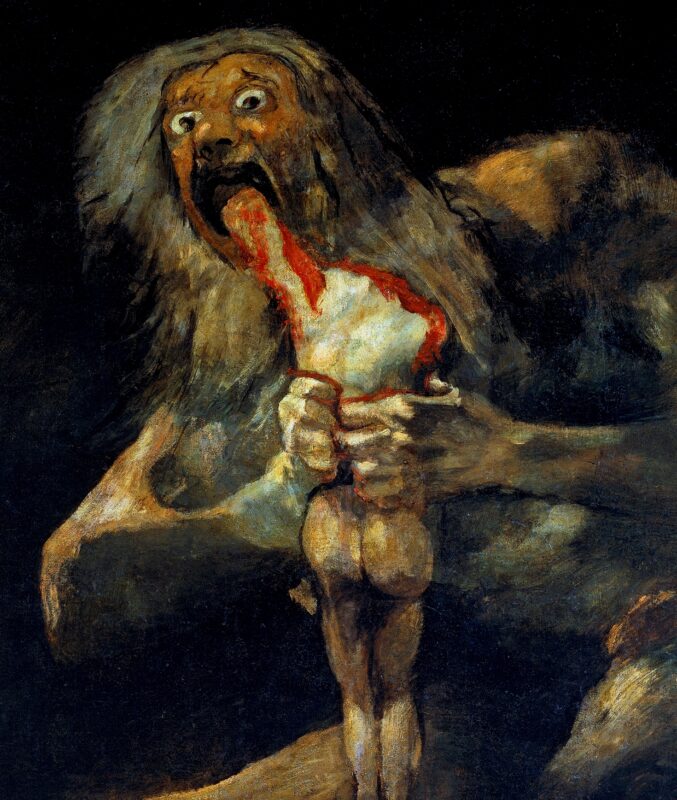 When we had come unto the fourth day, Gaddo
Threw himself down outstretched before my feet,
Saying, ‘My father, why dost thou not help me?’
And there he died; and, as thou seest me,
I saw the three fall, one by one, between
The fifth day and the sixth; whence I betook me,
Already blind, to groping over each,
And three days called them after they were dead;
Then hunger did what sorrow could not do.”
When he had said this, with his eyes distorted,
The wretched skull resumed he with his teeth,
Which, as a dog’s, upon the bone were strong.

Many readers will have recognized the solemn voice of Dante in this verse taken from canto XXXIII of his great work Inferno. I believe that no literary reference could provide a more appropriate introduction to today’s topic than Count Ugolino, also known as the cannibal count. Imprisoned together with his sons, Count Ugolino felt death creep upon him due to the fast imposed by the jailers. In order to save their father, in a final act of love, the children begged him to eat their meat, and this is what Ugolino did.

Another description of this event in the Divine Comedy tells us that Ugolino died before he could commit such an act. However, for the purposes of a blog about mysteries and horror stories, perhaps we should overlook this gentler version of events.

We could also make reference to the myth in which the god Saturn, known as Titan Cronus in Greek mythology, devours his children. In this story, Saturn fears that one of his sons will usurp the throne and tries to prevent this from happening. The bloody results are magnificently depicted in one of Francisco Goya’s black paintings, ‘Saturn Devouring his Son.

By now you must have realized that today’s article deals with a similar theme, which also ties in with last week’s story, The House of Cats. That’s right… Cannibalism.

In ancient times, before the Spanish Inquisition was established in the fifteenth century, Christians, Arabs, and Jews lived together in the city of Madrid. The city was defended by two walls, one Christian and one Muslim. The latter had a door, called Puerta de Moros (the Muslim Gate), located next to the church of San Andrés in the heart of the Muslim district. The road that led to the nearby city of Toledo passed through this gateway in the city walls. The area was full of dark and dangerous alleyways, where it was easy to lose your belongings – if not your life – at the hands of armed robbers. The winds lashed around the city walls and terrible unearthly screams were often heard in the vicinity of the gate. The Christians started to believe that these lamentations were the cries of despair uttered by the souls of those who had died whilst professing another faith, and who now wept in the hope of receiving Christian baptism.

One night, therefore, some Christians furtively approached the gate and hung up a huge cross in the hope of freeing those tormented souls. Imagine their fright when the cries, instead of disappearing, increased in volume, piercing the ears of those terrified men who fled as they saw shadows approaching.

From this day forward, the ghostly apparitions reappeared every night. The neighbours, both terrified and intrigued, began to investigate the meaning of that whispered name, hoping to get to the bottom of the mystery. They soon understood that the shadows were pronouncing the name of a man who lived near Puerta de Moros, and they did not hesitate to seek him out and demand an explanation.

The man was wracked with guilt when he heard about the three tormented souls who could not rest in peace. Confronted by the angry neighbours, he broke down and confessed everything.

If you have been following the story carefully you may have already guessed whom those poor souls belong to. If not, be prepared for a nasty surprise.

A widowed father from a humble background, the poor man had scarcely enough money to feed himself and was on the brink of starvation. With five young children to provide for it became an impossible task.

Like a macabre version of Hansel and Gretel, he decided to remove some of these hungry little mouths. But he did not send them into the woods and neither did they return with a pot of gold found in a marzipan house. No … three of his five children were served up for dinner.

When his terrible crime was discovered, the man was arrested and sentenced to 200 lashes of the whip. But his body did not resist and he departed this world before the punishment was completed.

A few days later, the terrifying cries around the Puerta de Moros gate ceased. It seems that those tormented souls could finally rest in peace … or perhaps they were finally taking revenge on their killer.

If we needed to find a moral to the story, what would you suggest? Do not you eat your children? Avoid raw meat? Turn vegetarian? Perhaps all three, although fortunately, our stories do not need morals, since they just serve as a looking-glass through which we may discover the mysteries of this beautiful city: Madrid.